Dog Diapers – Not All Are Good

Dog Diapers – Not All Are Good

Okay, who reading this hates those ugly black dog diapers that you can get at most pet stores? I mean, they work, but they’re not exactly attractive on our furry ladies. Don’t get me wrong, they work! We want that, right? Who wants the consequences of not having a dog diaper on your female? During that time of the year?

Yeah, me neither. Here’s the deal, I have dog diapers already. I purchased the only ones available in all of Alaska. The plain black one from Petco. They’re great, don’t get me wrong. But look at them. Blah! 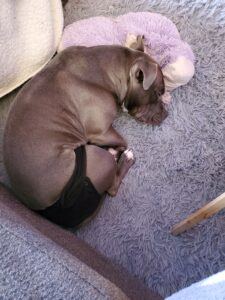 We all know that female dogs go into heat. The time frame for this depends on your breed and the individual dog herself. Large breeds can hit their heat cycle several times a year. Smaller breeds, sometimes only once a year. Atlas? She’s every 6 months. Typical for the Bully Breeds.

Now, we know that during this time with larger dogs, you HAVE to have a diaper. I mean, otherwise they leave a trail. Ew. We don’t want that. So, dog diapers are meant to hold this in. Now, I have the 2-pack of the So Phresh Dog Diapers that I bought from Petco. Atlas has four of these now.

The problem with the So Phresh Dog Diapers? They’re Velcro. I hate Velcro! The first two didn’t last. I had to buy sew on snap buttons to fix them. The last two have fared better. The Velcro is still kind of there. However, I wanted to try out some other options. So, I went online and searched for other dog diapers.

Looking online for cuter dog diapers was fun. However, some of these things are stupid expensive! I found this really cute one that had little straps that go over the shoulders. But this thing was like $60! Petco’s were $30 for two. I’m not spending $60 on one dog diaper. Not only that, they were out of stock until 6 months. Yeah, not happening.

Then I started looking at other sites, Etsy and Pinterest among others. I’ve looked on Amazon as well. But you know, some things from Amazon are….well, not so great. Sure, I found a bunch of options. But then you look at the reviews and they get so-so reviews.

Then, I found some at Ali Express. Now, with this site, you have to be careful. Lots of things come from overseas. What does this mean? They can take forever in shipping.

But, I figured, screw it. I’ll order some that I found.

Not All Are Created Equally – Size-Wise

I ordered from Ali Express. I ordered several sizes to gauge how they were. A small, a medium and a large. I was so excited when I received the email notification that one of the dog diapers came in the mail! Yay! I checked the mailbox and there it was! And, it only took a week to ship to me! You know that’s fast!

I opened the package and saw this uber cute diaper! OMG! Pink with polka dots. Little straps that go over the shoulders. Even a little TuTu-like ruffle across the butt! Then, the test. “Atlas, come here, Baby!”   She came running into the room, jumped on the bed all excited! Tail wagging!

I unsnapped it, un-Velcroed it, and attempted to put it on her. Back legs in, attempting to stretch this diaper over her butt. Why won’t it fit?

So, I asked my husband for help to see if a Large would fit Atlas.

He comes in, and immediately says, “Babe, this is too small.”

Ugh! I already knew, I just wanted to try. Too small. The medium won’t fit and the small certainly wouldn’t either. Lame. What do I do now?

So What Are My Alternatives?

Here’s the deal. I want to create a diaper for female dogs that is cute, and practical. I’m not a fan of the plain black ones, you know that from my blah story above. I’m also not a fan of buying something that needs tweaking. Especially for $30. They should be good to go and last, in my opinion.

I also want something a little more feminine for my Atlas and Buttons. What do I do to achieve this? I think I’m going to have to make my own diaper. That might be the best solution. So, I’m going to find some cute material and start from scratch. Will this pan out for me? I’m not sure, so I suppose, to be continued.

Of course, if you aren’t like me and willing to make your own, then Petco still has theirs. There are sites out there that offer up cute diapers, but like I said, some can be expensive. I know I can make them for much cheaper than $60. There’s no way that amount of material costs $60.

Unless I’m making a diaper for a St Bernard.

This article probably wasn’t helpful, I know. I posted some links to Petco for their dog diapers. Of course, Ali has theirs for less money. They were only $4 per diaper. Just very, very small. There wasn’t an XL option either I’m afraid. For us Bully parents, we know our dogs are bulky. They’re buff.

So, I’m going to find some super stretchy material, some fluff and some snap buttons. I’m going to make these things and go from there. If you follow me, stay tuned for the end result I guess! If it’s super easy, I may even just sell a few. I’m sure the Bully parents out there will appreciate that!

Especially having diapers with straps to hold them on for those females that like to tear them off. I am lucky with Atlas in that she doesn’t do this. She is actually very, very good with her diapers. She lets me put them on her easily. She doesn’t chew them off, or try to rip them off. But I know a lot of Bully parents out there that claim they have to have straps. And, I’m just going to make them cute!

So, if you want to see the end results, keep checking back. Or, subscribe to my site and you’ll be notified of articles posted.

8 thoughts on “Dog Diapers – Not All Are Good”