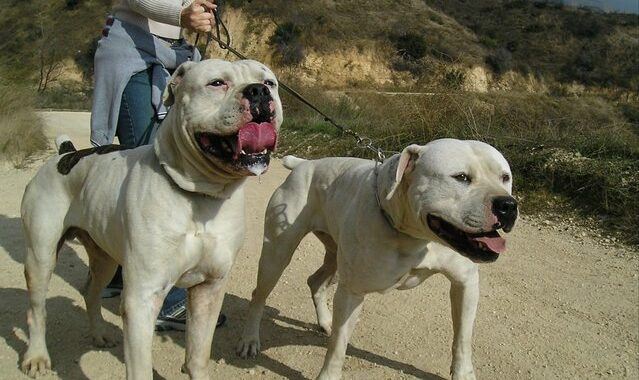 Dogs don’t know their size and my Bully is no different.  She’s not as small as she was as a pup – obviously.   She might only be 16 inches tall to her withers, but she’s about 60 lbs, even being so short.  60 lbs of muscle on small paws is a lot of weight!  Especially in a concentrated area, which, can feel similar to a Charlie Horse – ouch.

Atlas has been raised with two small Chihuahuas’s.   The problem with small dogs is that they tend to like to jump all over the place.  Walking over people to get to where they’re trying to go and when they want attention, step on my chest. While I’ve been attempting to correct this, it’s not working like I was hoping.

Dogs will learn behaviors from other members of the pack, even the behaviors that you want to try to avoid, especially if the behavior is aggressive in nature.  It’s no different when it comes size, because dogs just don’t know size like we do.

Do Dogs Know Their Size?

Dogs don’t know their size actually.  When Atlas watches my smaller dogs walk on me or over me, she’s under the impression that she’s the same size as the small dogs. When they attempt to come up on my chest requesting love and attention, Atlas will do the exact same thing. It’s completely different with a dog that weighs about 3 lbs versus one that weighs 60 lbs.

Not all dogs learn this behavior from small dogs though. I’ve had friends that have only had very large dogs and their dogs seem to think they’re small, regardless of how they’re raised.

In observing this, I’m convinced that dogs honestly don’t register their size. A very small Chihuahua, like Buttons who weighs 2.5 lbs thinks she can take on any sized dog that she’s ever met.

I witnessed her once jumping up and grabbing a hold of my neighbors Extreme XL American Bullies lip and hanging from it while making this weird, screechy noise. After she established that she was dominant over this 140 lb dog, he was actually afraid of her from there on out. I would watch as he would often look confused that this tiny little dog would growl at him and stand her ground, and he would dip his head and lay on the ground waiting for her to walk away.

Having small dogs, there are definitely some nuances that they’ve taught my larger Bully that drives me crazy. In looking back at how we’ve allowed them to act, it is completely our fault for not correcting this behavior long ago. One of the things that drives me nuts is when they walk over me to get to a destination.

My small dog can’t jump down from the couch, nor jump up on it, so it makes sense that she would have to walk over us. Unfortunately, this has led Atlas to do the same thing to get somewhere versus jumping down first and getting to where she needs to go.

Atlas’ brother, having been raised with a large dog, does not do the same thing as Atlas, and it’s because she’s watched what the small dogs do and mimics the behavior.

My small dogs also bark a lot, or as I refer to it, yap a lot. While Atlas isn’t near as bad, she does have a tendency to bark more than some of the Pocket Bullies I’ve been around and I’m convinced it’s also because of the yappers I have. My male Chihuahua is the worst and drives me insane. But let me just say – the male Chihuahua was a gift to my daughter when she was 15 that begged for a puppy and picked him out. She was supposed to take him with her when she moved out at 18, but that has yet to happen. So, in my times of absolute insanity with him, I tell my daughter that she needs to get her dog.

How To Correct This.

Correcting the behaviors when they’re older is much more difficult versus not allowing them to act in certain ways to begin with. Walking over us should have been a no-go as puppies. I will say, with Buttons as a puppy, she was smaller than a very small phone, so of course we carried her around with us because jumping would most likely have been detrimental to her bone health. Harry on the other hand is perfectly capable of jumping up and down from the couch.

Begging has always been a corrected behavior in our home, however, the small dogs have often ducked and dodged under counters, being the ever vigilant scavengers. Atlas attempting to duck and dodge under things is a hoot to watch because she simply can’t fit, but she tries. While I know I shouldn’t laugh as this sends the wrong signal, I can’t help but laugh hysterically when she gets stuck in small spaces attempting to be a Chihuahua.

In addition, not all behaviors dogs mimic are bad exactly, only some. Some are simply uncomfortable like a 60 lb dog standing on my chest, licking my face attempting to get some attention.

Now, because Atlas is an extremely smart dog, she doesn’t bark as often and has learned the “Speak” command for this reason so that when her deep, resinous bark comes out, I can say, “No Speak.” Even though she was starting to learn insistent barking from the other two small dogs, she’s learned her commands and obeys.

Side note – I will say, it is comical watching her try to belly crawl under very small spaces like the other dogs and instead of making it, she gets stuck and instead has to wiggle her butt to get loose.

At the end of the day, being mindful of how a dog is raised will help anyone that has small dogs and big dogs together. Treating all dogs the same will help with their overall behaviors they witness, and will make it much easier to train them all to act the way you need them to. I don’t allow my small dogs to act aggressively, the same as I wouldn’t allow a large dog to act aggressively either.

All dogs are the same and should be trained accordingly.