Socializing Two Dogs – One Is Older.

Socializing Two Dogs – One Is Older.

I’m going to start off by saying, yesterday was a train wreck. Muse is such a good dog, when she’s in the house. Well, around people in general. But man, get her around another dog with Atlas there? Geez, she’s a wreck. This article is going to be mainly brain-storming. Only because, socializing two dogs together, is going to be difficult, to say the least.

And I say this only because, I will have the two dogs on a leash, together. Let me do a quick recap for you before I get into this more. So, two weeks ago, my dogs attacked my Mom’s cat. She’s fine, but it was pretty darn scary to watch and attempt to break up.

Then, at a friends last night, they tried to attack his huge dog. He has the same breed as Atlas and Muse, but he’s the XL version. So, he’s got 100 lbs on both Atlas and Muse. Well, that didn’t stop them two.

We went to a friend’s house yesterday to watch the fight between Mayweather and Paul. Terrible fight by the way, but let’s move on. The day was a normal day for Atlas and Muse. They played, they slept, they begged for food. All the normal things. As people started to leave for the night, my friend was sad that his dog was just whining from his Mom’s house. So, he brought him over.

Now, I still have slight PTSD from them trying to attack my Mom’s cat. So, I was weary of them together around another animal, even if he is 140 lbs of pure love. That didn’t matter. Muse, introduced to any new animal with Atlas around is a wreck. Atlas has never attacked another animal until we brought in Muse. This is the second time we’ve had to break up a fight. Callie, the sweetheart, just took the beating!

The XL Didn’t Fight Back?

American Bullies are actually supposed to be a dog friendly breed. Most people think they’re APBT’s and that they’re aggressive. However, according to the ABKC, aggression is highly frowned upon. But, they are a dog. And, some dogs just don’t like other dogs. This is rare, though, among this breed.

While Muse and Atlas are forming the pack and attacking Callie, he just stood by making noise with his mouth open. I know he was telling them they better calm down before he strikes, but I didn’t want to wait for that to happen. My dogs were literally fighting him, and trying to cause a whole slew of medical bills.

My husband had to grab Muse by her back legs, and I had to grab Atlas. We pulled them off of Callie, but not before he got his ear bit, and he was bleeding. I can honestly say, I’ve never seen Atlas do this until Muse. So, she’s feeding off of Muse’s energy and in a bad way.

No matter what breed you have, dogs have to be socialized! All dogs in fact. They have to know how they can act around other dogs, in a friendly, social way. People as well. When Atlas was first brought home, we passed her to every person we met. Letting her know, humans are okay. We took her to every store and introduced her to every dog around. This lets the dog know, that dogs are okay as well and how to behave.

We started this when she was 8 weeks old. Muse, however, is a new addition to the family. Now, Muse was raised around several other dogs, but I’m not sure if she was brought out in public to be socialized in that kind of setting. I just don’t know that much about her upbringing.

However, she was fighting with another female in the house, and badly. They had to be broken up in order for the dogs safety. They simply couldn’t be around each other without fighting. I believe, that when Atlas and Muse are together, Muse is protecting Atlas, even though Atlas is calm. But there’s an energy there that I have to get right.

The Start of Socializing Two Dogs – Especially the Younger One.

I’ve had to socialize dogs for years. But, I’ve never had to socialize two dogs at the same time. And that’s what I’m going to have to do. First off, I’ll need to teach Atlas once again that dogs are okay. Only because she was taking part in the attack, and that’s not okay. At all.

Muse is going to have to learn that dogs are okay. I know what to look for, and I saw it last night. But, after lots of drinking and people thinking they were fine, because they were just fine around people, they didn’t listen. Hackles go up when a dog is around a situation they don’t like. Staring, stillness, all signs that they’re ready to attack. I saw this from Muse, and attempted to separate her before the fight started. Didn’t work, obviously. “She’s fine babe.” No, she’s not.

Now, I’ve never trained with a muzzle, and I don’t intend to start now. Much as my husband thinks differently. Muzzles can backlash at training. It’s basically a short term solution for a dog that is a biter. Muse only attacks other dogs, not people. 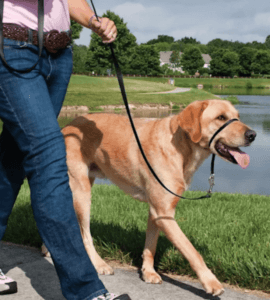 So, I ordered her a gentle leader instead.

What is a Gentle Leader?

This is a really good training tool, but I’ve only ever used it to train a dog to walk on a leash. However, the design of this leader is a great way to keep control of a dog that is strong. And this is what I need for Muse. I’m going to use this training tool to bring her around dogs, without Atlas first. I need her to know that being polite is the way to behave. Once I can successfully achieve this, then it will be time to introduce them together.

But, this is where it will get tricky. I already know I’ll need my husband to assist, even though he hates training dogs. I might be able to on my own, but in the beginning, I’ll need another set of hands. Since Muse and Atlas seem to act like a pack when around other dogs, or cats, I’ll need to train them that this is not okay. Their energy is not the good kind when they’re together, out of the house around other animals.

It will take me, probably a good two or three months to achieve this, but that’s okay. I can’t have them attacking other dogs or cats when they’re out of the house. Or, anytime, really. I’ll reward good behavior with treats and praise. And, I’ll have to correct the negative behavior immediately. But, that’s the need for the leader. It will allow me to pull her back easily in the event she starts to exhibit any sort of signs of attack.

I’ll update this when the training is halfway through and done. Socializing two dogs together? Sounds like a project, that’s for sure.

2 thoughts on “Socializing Two Dogs – One Is Older.”