Why I Started AK Hurricane Bullies – The Blog 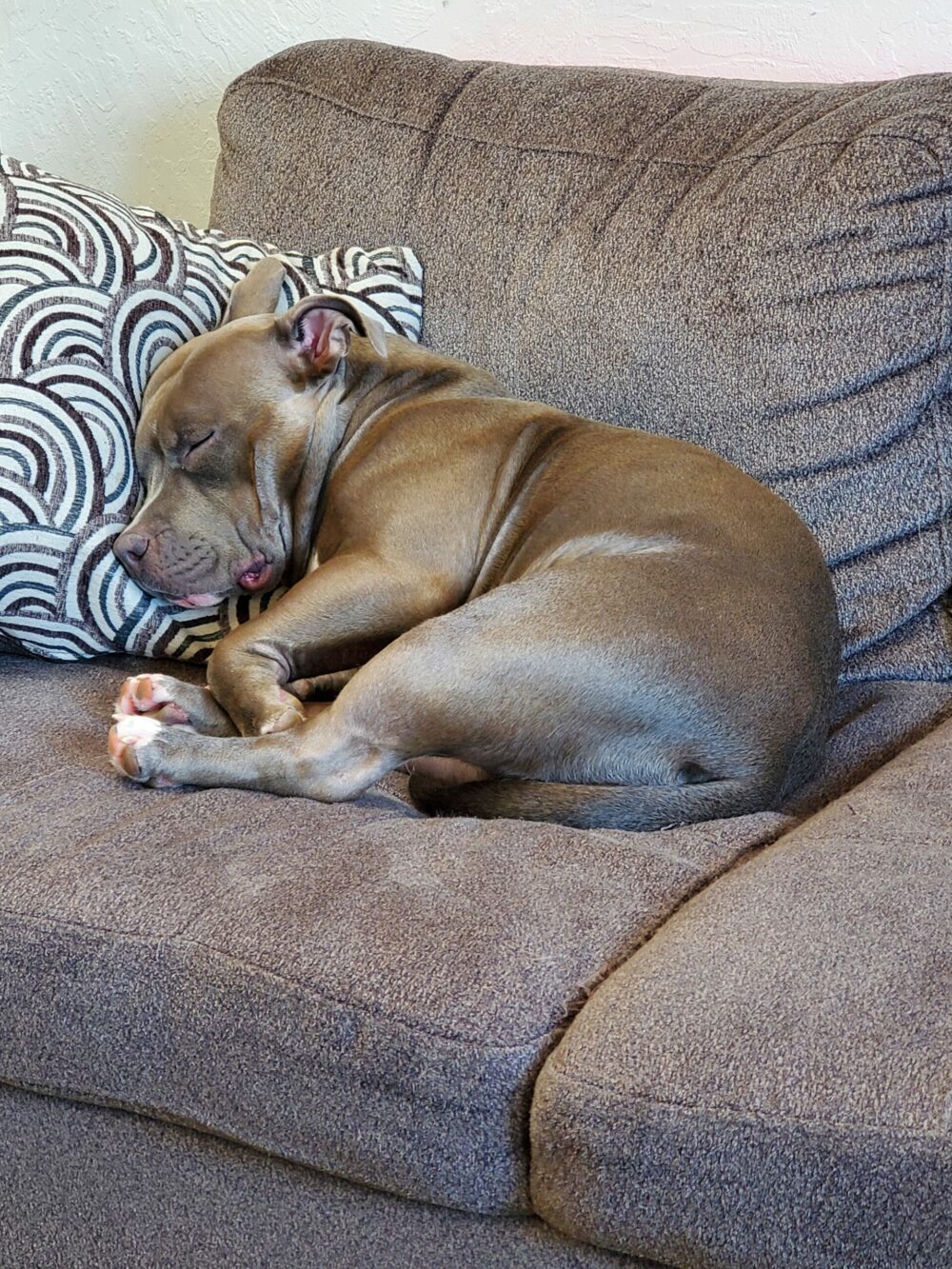 I get asked this question a lot. Not by my readers, more like from my friends. Now, I’m here to tell my story of why I started AK Hurricane Bullies. First off, I love writing. My second passion is Atlas. Don’t get me wrong, I love my kids and my husband. Atlas, however, is like the fifth child.

She goes everywhere with me all day. I never leave home without her. Well, except today for about 45 minutes. But, it’s really cold out today and I didn’t want to leave her in the car. When the temperature drops too low, I worry about her because she has a short coat.

Anyway, getting back to my story. Why did I start this blog? First, you have to know how I came to even find Atlas. Then, her personality is what made me fall in love with her. After that, she continues to amaze me every day.

When I first came to find Atlas, it wasn’t her that I found first. Back when I was working as a General Manager of the largest liquor store in Alaska, a woman came into the store with a puppy in her purse. My husband, Mike, is the first one to have seen the puppy. Naturally, he had to ask her what kind of dog he was. So, he walked up to her and needed some puppy love.

Next thing I know, he’s calling my phone saying I needed to come see this puppy. I know myself, and I absolutely can not resist puppies. I first said no. Of course, after much convincing, I finally came down to see this puppy everyone was crowded around. Let me tell you, he was adorable! Tri color male, cute little face, and his blue eyes! I was in love! Of course I asked her where she got him from. So, she gave the name of the breeder and said that he had more puppies.

It was actually very easy contacting the breeder where I got Atlas. They go by Rage City Bullies. Very, very nice people. Before even contacting them, I pretty much knew about the puppies from asking a ton of questions in my store. What breed were they? How much did they cost? How were they as dogs?

Now, I didn’t know anything about the Pocket Bullies before this interaction. I had heard of the American Bulldog, and of course the American Pit Bull Terriers. But never the American Bullies. Yes, they’re different. They’re their own breed as recognized by the ABKC and other Kennel Clubs.

I will say, I had never wanted an ABPT. Not because I think they’re bad dogs, quite the opposite. Actually, they are great dogs! Good temperaments, very smart and extremely loyal. But, there are a lot of restrictions with home insurance and all kinds of garbage caught up with the breed of dog because of bad media. Okay – back to Atlas. She is not an APBT.

After contacting the breeder, they were very open about bringing the puppies they had left for adoption for us to see. They set up a time and said they would come to us in our neighborhood. They had several puppies left for adoption, so I was very excited!

Now, before I even met with them, I already knew I was going to want to take one home. Meeting her brother in my store, I was already in love. Kenzo the Kissing Booth is his name, and he is gorgeous! All their dogs, really.

We decided to have them meet us on our street and told all our friends about the puppies. RCB came pretty quickly, only a couple days after contacting them. Once they arrived and opened the back of their truck, there they were! Puppies! Picking was the hardest part. My husband and I went back and forth trying to decide which one we wanted. Now, I favor female dogs over males, I’m not sure why. I always have. So, I kept going back and forth between the fawn female and the blue.

My husband was in love the blue, but I couldn’t put the fawn baby down. She was so cuddly and snugly! But, he was in love with Atlas, whom he was holding. So, we decided on her. I’m thankful we did, because she’s changed our lives!

Since the puppies were only 6 weeks old, we couldn’t pull her from her Mom yet. RCB was so easy to work with, though. They told us the price with and without breeding rights. Basically, if we wanted her to have puppies, then we needed to pay $2500. Without puppies, $1700. At first, we were undecided on whether we wanted puppies, so we paid the $1700 upfront. They asked us if we knew a name yet, and of course we didn’t. Usually, I don’t name a dog until I have them so I know what they like. Yes, animals can choose their names. You just have to listen is all.

But, as a couple days passed, we had decided we wanted to name her after a God or Goddess in Greek Mythology. It took us a few days to decide on one, and we decided on Atlas. I knew she would hold up our world. RCB will actually start using that name for the puppy to get them used to it. Which is great! Once the 8 weeks came around, they brought her to my work and dropped her off.

I instantly fell in love as if she was my child.

Not only do I love Atlas more and more with each passing day, but she inspires me to write about her. Everything she does is a miracle of life. A miracle that RCB made such beautiful puppies that everyone in the world should be able to hold. Not only is she the smartest dog I’ve had, but she tries to talk to me. It’s very cute actually. And, what’s funny is that she knows my routine.

Before writing this article for example, I started feeling cold. I went to the room, grabbed a sweater and threw it on. Now, as I got up, she was sound asleep next to me, snoring away. But, when I get up, she watches my every move. I come out with the sweater and as I’m starting to get it on, she looks to my computer, open on the table. She’s deciding if I’m getting ready to leave, or if I’m getting ready to write. Once she saw the computer open on the table, she laid back down. Still, not taking her eyes off of me in case I closed the computer. Then she would know I was getting ready to leave.

When I go to use the lint roller, she knows I’m getting ready to leave. She stays on my heels the whole time to be sure that I won’t forget about her. As if that could ever happen.

Everyday is more Love for Her.

Every day that I spend with her, I love her more and more. I video her constantly, take pictures of her and just enjoy every day that I have with her. Dogs are a miracle, but when you find that one that blends perfect with your family, you should stop once in a while and appreciate the life you share together.

RCB and I continue to stay in touch. Whenever I post something that’s happened to her on FB, they worry. Not many breeders will continue the relationship, but they do. And I’m thankful for that. Questions, concerns, anything that pops up, I know I can ask them.

And this is why I started this blog. Because sharing my life every day with Atlas makes me want to write about her. Things that happen on a daily basis inspire me to share that with the world. Anything that I’ve learned from her, I want to share that information.

I plan on continuing this blog for the rest of my life, along with her. One day, I know she’ll be old and I’ll be a wreck, but I plan on having her daughters. Yes, we decided that one day, she will have puppies. Hopefully soon, actually. But, I can’t imagine a life without her, and I know she’ll get old and pass. But as long as I have her spirit in her daughter, her granddaughter and so on, I’m okay. She will live on forever with me by my side.

4 thoughts on “Why I Started AK Hurricane Bullies – The Blog”