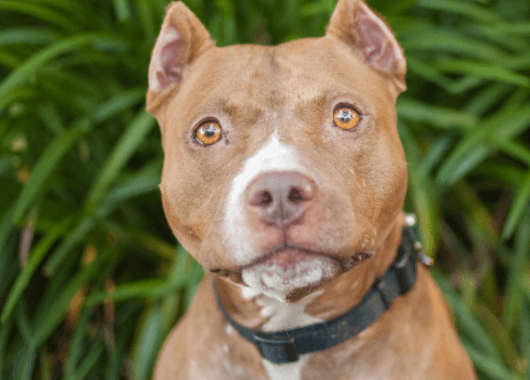 I say they’re complicated because of their overall characteristics. They are a very sporty and agile dog, bred to help hunters and farmers both. A cross between a Terrier and a Bulldog, the APBT is one of the most sporty dogs out there.

Often in shows as the performance dog, they win numerous awards because of their overall abilities. In many shows today, the ability for the American Pit Bull Terrier to catch, hold and wrestle while able to breathe easily is the number one aspect that shines for them. This dog is amazing in what they’re capable of doing, but first, let’s dive into their appearance.

General Appearance of the APBT.

The American Pit Bull Terrier has a very distinct look and profile. While many people confuse the American Bully with a Pit Bull, the Pit Bull is meant to be proportionate and weight. Because this dog competes in shows, they must be true to size. They also must be able to scale heights as well as run hurdles.

In general, the Pit Bull males are usually 18″-21″ in height to their withers. Their weight is usually 45 to 65 lbs to coincide with this.

As you can read, they are not massive, muscular dogs. They are supposed to be very fit, and have the ability to easily get around, especially in competitions.

I want to point out that classifying your Pit as a red nose does nothing for them in a show. They are simply entered in as, American Pit Bull Terrier. All colors are accepted in the shows except the Merle color which is disqualified.

As for characteristics regarding their temperament, this is where the APBT shines.

The characteristics of this breed is where they are often misunderstood. The American Pit Bull Terrier is a very hyper breed of dog. Requiring a lot of exercise, if they lack this they may lash out in other ways. Over the years, I’ve had Pit Bull Terriers as well as helped family train theirs. Very spunky and full of energy, they are not a breed to be left for long periods of time, or confined.

In order for this breed of dog to be at their happiest, they should get regular exercise. They also need to be socialized early on as well as properly trained. Some Pit Bull’s that aren’t trained correctly, may show some aggressive behavior over time. Their history behind them has much to do with this.

The Pit Bull has been around for over 150 years according to the ABKC. They were initially bred in Europe to be an agile dog that helped on the farms with cattle and other livestock. They were also highly sought after as hunting dogs because of their athleticism.

According to the American Bully Kennel Club, The American Pit Terrier was bred back in the 19th century as a cross between a Terrier and a Bulldog. Farmers and hunters wanted a dog that was extremely athletic and agile, running after the prey that was hunted and able to drag the prey back easily.

The American Pit Bull Terrier was the Gladiator of all dogs. Able to show great strength and adaptability, they have been misused over some years. People recognized the strength in this breed and used them for ill purposes and this is where the breed became known as aggressive. This is their dilemma.

The Pit Bull’s dilemma is that they are a force to be reckoned with. Meaning, they are able to scale walls, jump extremely high hurdles, and take down the prey they were bred for as hunters. Farmers used the Pit to keep the cattle in check, so large animals don’t affect the Pits ability to do their job.

Because of the power behind this amazing breed, people misused this to their advantage. Pinning dogs against dogs for years, they were thrown into a real Gladiator situation. This archaic sport and animal cruelty, however, is what the world sees when confronted with the American Pit Bull Breed.

Technically, this dog was bred to assist the owners with everyday life, while being a lovable family dog at the same time. Having both Terrier and Bulldog in their mix, they were bred to be family oriented while still being agile enough to help with heavy tasks.

The Pit Bull does have it in them to exhibit aggression towards other dogs, not humans. This is highly misunderstood with this breed. Aggression is not generally towards humans, but rather towards animals in general because of their blood. Socializing at a young age is imperative with Pit Bull’s to help them understand they are now the family dog. A fierce protector however, I feel sorry for any intruder attempting harm to their family while on watch.

As the APBT continues to be misunderstood, especially as bans continue to grow, they actually are a very loyal companion. Extremely lovable, and true to their nature, they are a great family dog.

Some precautions should be noted though for the Pit Bull owners. Ensuring that training is done properly, especially with positive reinforcement will ensure the dog listens in certain situations. This can be especially helpful in situations like a dog park. If a dog fight breaks out, you can be sure the Pit Bull will end it. They won’t always be the starter of a bad situation, but if attacked, they will show their strength and agility.

Not all dogs at a park will have been trained appropriately, as many of us dog owners already know. For those of us that have a strong regulator though, we know that our dogs, if attacked, will hold their own and finish the fight. Having your dog understand the “Leave It” command, will ensure that the other dogs aren’t seriously harmed, regardless of the starter.