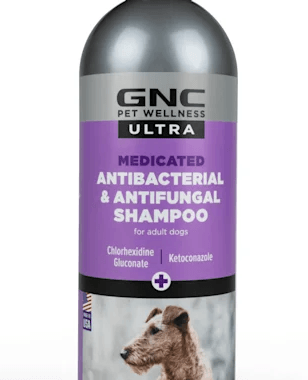 Earlier today, I was at my friends house. She had mentioned that her dog was nursing her paw and she wasn’t sure why. She asked me to take a look at her paw, and see if I could tell her what was wrong. I looked at each paw carefully, since I could tell one was bothering her more than the others. What I found surprised her. Dogs get yeast infections?

Yes, dogs get yeast infections. Just like with humans, their skin can get a bacterial growth on it that causes them the same discomfort as it does for us. Some people will ask, how do they get them? Well, it can’t be spread from other dogs, so more often than not, they just get a bacterial growth. Usually, the growth will be caused by allergens in the environment or their food.

How do you know your dog has a yeast infection? What could have caused it? How can you treat it, and how can you make them more comfortable?

Where did my Dog get a Yeast Infection?

Short of going to the vet for an absolute determination that they have a yeast infection, you can only guess that they have a yeast infection by the way. Normally, a dog will develop this in areas that tend to be moist. These areas can be their ears, between the pads on their paws, as well as other areas that are more moist. What do I mean by that?

Well, take of look at your dog. Look at areas that aren’t well aired out. Their ears for example are one of the main areas that can get yeast infections. Atlas has had them a few times in her ears, and it’s usually from not being dried off completely after a bath.

Their paws are also an area that can stay moist, especially if they’re long furred dogs. Unless they’re laying down all day, they can develop yeast in their paws. Now, how do you know it’s a yeast infection?

How can you tell Dogs Have a yeast infection?

A yeast infection isn’t as bad as you might think by the way. Our bodies all have yeast in them, so the yeast cells can just over grow. To know this, the area will usually be red, and can smell slightly like yeasty bread. It may also have some yellow or greenish colored discharge, but this is usually in more severe cases.

Look also for any crusty skin as well. However, this can take time for this to develop. Normally, the redness between the pads on their paws is the number one indicator. The dog will feel discomfort, so they’ll usually nurse that paw a lot while trying to clean the area.

My friend had mentioned that her dog was licking the area a lot lately and she couldn’t get her to stop. This is normal. However, it doesn’t allow the area to dry out. We’ll get into treatment in a moment. But first, how did they get it?

The Cause of Yeast Infections.

Like I mentioned above, dogs can’t get yeast infections from other dogs. They can get mange and other types of infections that are caused by mites, but yeast itself is simply a bacterial growth. Dogs will often get this when they are allergic to something in their environment. Whether it’s a specific type of grass in your yard, or the food they’re eating.

Dogs are sensitive when it comes to allergies. I know from personal experience with my Bullies, because they can be allergic to numerous environmental factors. When Atlas was younger, she was very allergic to the grass in our yard. She ended up getting a bad diaper rash all over her belly and we had to treat it with diaper rash cream. It healed up fairly quickly, but we had to be diligent about applying the ointment.

Which leads me to my last part. How do you treat yeast infections in dogs?

Treatment for Yeast Infections for Dogs.

When it comes to yeast infections on their paws, I advise to use an antibacterial shampoo or ointment for them. Generally speaking, there are a lot of shampoos that you can buy from the pet store that will help. One in particular that I’ve found helps from reviews is the GNC Antibacterial and Antifungal Shampoo.

I found this at both Petco and Pet Smart for only around $13. Recommended to be used at least once to twice per week, it seems to clear them up pretty well.

For Atlas with her diaper rash, which is also similar to a yeast infection, I used Bourdreaux’s Butt Paste. It’s a natural cream that isn’t toxic if ingested. Since she is a dog – what do dogs do? They lick everything! I wanted something that wouldn’t hurt her if she licked it. Plus, she was still just a puppy at the time, and she got into everything.

Within a week, it was cleared up and she’s been fine ever since. No more rashes. She will get yeast infections in her ears, but I have a solution from her vet for those. I chose that route since they spread ear to ear and wouldn’t clear up with anything over the counter. So, a vet visit was a must for those.

If you’ve read any of my articles in the past, you already know that dogs are so similar to humans in so many ways. Many have argued this, but honestly, in all my years of research, I can tell you, we’re pretty darn similar. Same skin conditions, same issues with digestive issues, etc. So, if you notice that your dog is having some digestive issues, this is usually where their allergies will start. Over time, they can develop into their paws and start to turn into yeast infections.

If you notice a redness developing, then I would recommend just running and getting some special shampoo and start cleaning the area. Anti-bacterial, Anti-Fungal isn’t going to do any damage to their skin. Better to clear up the yeast before it gets worse and develops into scaly skin that can ooze fluid.

Also, try to limit the dogs licking the area as much as possible. They can make it worse by keeping the area moist. Best way to help clear it up, keep it clean and dry, especially after walking them in any areas that are wet.

How have you cleared up yeast infections in your dogs in the past? Share your success stories!

2 thoughts on “Dogs Get Yeast Infections?”