Older Dogs Can Come With Fears. 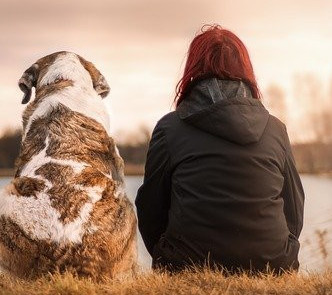 Older Dogs Can Come With Fears.

Bringing home an older dog can sometimes have its quirks. Many that have adopted older dogs know this, and even some that simply rehome may know this already as well. Older dogs can come with fears that we don’t know until later. Many dogs, when brought home at an older age, will start to show their true nature after 3 months. That means, in the beginning, they’re still getting used to their surroundings.

After the 3-month period has passed though, then dogs will become more at home. This is when they start to feel part of the family, and of course, show their fears more. This isn’t always the case of course. Some dogs are simply afraid of things from the get-go.

These fears can come in a wide range for them. Here are some of the most common.

Fear of Sticks or other long Objects.

Dogs, when they’re in homes that aren’t always nice to them, will have a fear of objects that may have been used as weapons against them. Some of the most common among these: brooms, sticks, mops and other long objects. People, as horrible as they can be, will use these objects against dogs. When a dog is struck for any reason, especially with an object, they will come to fear that object. Not the person wielding it.

Now, some dogs will put two and two together, and have a fear of the gender of that person that hurt them. But we’ll get to that later.

More often than not though, a dog will fear those types of objects if they were hurt repeatedly with it. I know, it’s hard to think about a poor innocent dog being hurt with a broom. But, you’d be surprised how often it actually happens. I can’t imagine ever hitting a dog with anything, let alone something as hard and terrifying as a broom or stick. But, many dogs have a fear of these objects and may lash out when they see one, especially in your hand.

When I mentioned that some dogs will put two and two together, and actually come to fear the handler of the object, well, they do. I’ve seen a lot of older dogs fear certain genders. Men or women, doesn’t matter. More often than not, it is men 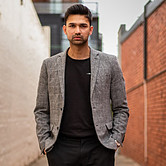 Dogs aren’t dumb. If they are being mistreated by a certain person, they will think that everyone like that person is bad. So, if they were hit by a man all the time, they will come to fear all men. Some dogs will actually become aggressive even towards men altogether. Not because they want to. They simply can’t help it.

When it comes to a fear of a certain sex, try not to be frustrated if this happens. As long as the dog is treated with love and kindness, and especially patience, they will come to learn that not all humans of that sex are bad. You just have to give them time to warm up.

Fear of other Things.

I’ve seen a lot of dogs afraid of typical objects like brooms and sticks, or even specific genders of people. What I hadn’t seen until my newest edition, was fear of water. It’s not typical that a dog is afraid of water, but, like I said, dogs can be afraid of anything. Usually, cats are afraid of water more than any other animal. Of course, it’s no wonder that cats are. Their fur absorbs water and holds onto it for a very long time. 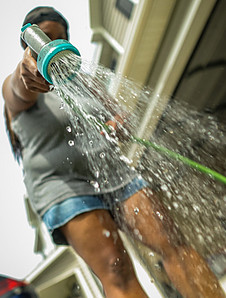 Dogs however, aren’t usually afraid of it. They may not jump at the idea of getting a bath or a shower, but fear of water is something new to me. Muse is actually very afraid of the water hose. She runs, terrified of it when I’m spraying the deck off. This is something that is new to me with an older dog.

Now, I’m not saying she was mistreated by any means. But, if she got a bath one day and water went up her nose and no one noticed, this can stem a fear for them. This is why, when my dogs are in water, I’m always near in case something happens.

So, how do you handle these fears in dogs when you see them?

How to Handle the Fear when it’s Projected.

Older dogs can come with fears as we know now, but how do you handle it when you see it? Some dogs, will show severe aggression towards objects. For example, if they fear sticks, when someone picks a stick up near that dog, they may dip down, ears back and bark excessively. Normally, the person would then show their own fear of the dog and keep hold of the item the dog clearly doesn’t like. Terrible idea.

If a dog shows signs of fear, which often come out as aggression, it’s important to stop whatever it is you were doing. If you have an object in your hand when they suddenly show this, obviously, you’d want to drop that item. Then, after dropping it, show your hands as being empty to the dog, while softly saying, “It’s okay.”

I wouldn’t approach the dog if they’re still afraid, until you know they’ve calmed down.

With Muse showing fear of water, now I know not to use the hose when she’s outside. She’s clearly terrified of it, so, I make sure she’s indoors when I need to use the water hose. I also make sure to never spray her with it.

Now, this doesn’t stop me from giving her baths. But, I make sure to be in the shower with her so she knows she’s okay. And lots and lots of cooing and praise during this time for her.

Final Words on Older Dogs Can Come with Fears.

If you’ve ever adopted an older dog, then you already know that older dogs can come with fears. It’s not something new to you. But, maybe you never had to handle it, or help them to overcome that fear. It’s just like fears for humans. But, that doesn’t mean that you face your fears and just chuck a broom in the direction of the dog. No, that would traumatize them more I’m afraid. And, most likely result in them being afraid of you now and possibly lashing out.

Many people mistake fear for aggression in dogs. Aggression is usually stemmed from the fear they’ve developed. When

an older dog shows fear, it’s best to try to help them overcome that fear very, very slowly. For example, if my dog was afraid of a broom, I might only use it when I’m far away from my dog. If they’re laying in the living room, it’s okay to grab it and use it in the kitchen. But, I would stay far away from them while using it. And, only use it quickly at first.

Simply showing your dog that you’re not going to hurt them with it is a step forward. However, a word of caution – if the dog is very aggressive towards an object, then it’s best to only use it when they’re in their safe place like their kennel. I would never want a dog to try to nip at someone over their fear. It does happen.

So, keep an eye on your dog when it comes to their fear of objects. Be sure that above all, you’re safe when trying to reintroduce them to something. And, make sure you reintroduce it slowly. It may end up taking years, but for them to know that brooms aren’t bad, well, that’s something!

4 thoughts on “Older Dogs Can Come With Fears.”