Dangers To Your Pets This Holiday 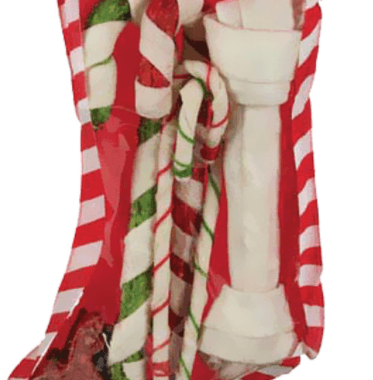 Dangers To Your Pets This Holiday

In conjunction to the article I posted for Thanksgiving, there are more dangers to your pets this Holiday. Many might be unaware of what those dangers are. Especially when we get so caught up in the Holiday that we just buy all the Holiday type gifts.

I’ve been a victim before in the past. I’ve been in many retail stores and I see all the cute gifts for my dogs. The Holiday stockings filled with fun looking chews. Let’s not forget about the colorful rope toys, either.

However, these stockings that seem so innocent are in fact filled with danger to your dogs. What dangers could there possibly be in those stockings? Or the gift boxes that you can even order? Why would retailers sell items that are harmful for our pets?

The Idea Behind The Stockings.

I get the idea behind the stockings, honestly. It’s something that some random retailer came up with long ago as a way to gift something to your pets. They’re often filled with Holiday themed toys, chews and raw hides. There’re stockings for dogs and cats. Maybe you even have a guinea pig that likes some toys? Who knows?

As we’re shopping for those closest to us, we decide to buy our pets a stocking too. Then we hang it up with the others and feel good that we included our pets. They’re part of the family, so why wouldn’t we?

Little do we often know, that what’s in the stockings isn’t the best thing for our dogs. The cat ones aren’t so bad. They’re usually just filled with random balls and jingle balls. It’s the dogs ones that I’m more focused on today. First thing, the raw hides.

Raw Hides That Are Dangerous. 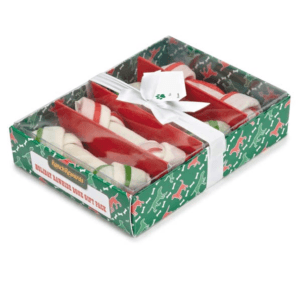 Not all raw hides are created equally. Some are good and most are bad. Raw hides are usually animal skin that’s been chemically processed to remove all the bad stuff. Let’s think about this for a moment. What do you think is on the skin of the animal? Fur, dirt, debris and anything else that was on there when the animal was killed.

In order for the companies to remove the fur, they have to use chemicals. The chemicals used are not safe for consumption. Even for your dogs. Once the fur and everything else is removed, then they want the skin white. So, bleach, bleach and more bleach.

Some companies use Hydrogen Peroxide to make them white. Well, Hydrogen is used to induce vomiting in your dogs. This is something I’ve always had in my cupboards in the event my dogs eat something they’re not supposed to. No matter what’s used, there’s going to be residue leftover on the hide. No matter what that residue is, it’s a chemical. It’s not okay for your dog to eat it.  What other dangers are there to your pets this Holiday?

Have you ever watched your dog eat a rawhide? If so, then you know it becomes a wet mass of grossness. That mass, once ingested can get lodged in their

intestines. This is referred to as a bowel obstruction. Any rawhide that is chemically processed can cause this in dogs.

The only safe raw hides for dogs are just natural chews. Natural chews are the skin or other items from animals that have not been processed. They are a natural item from the animals. I’ve seen many that are the antlers of animals. Some are the tendons from animals. Some are ears, though be wary of pig ears. There was a massive recall on them not long ago for causing sickness in dogs. Deer or elk ears are a better alternative.

Then comes the fun rope toys. How about those?

In the past, I’ve been the one to buy rope toys for my dogs. Unknowingly, I didn’t know that it’s bad for them. Rope, when ingested can get tangled up in the dogs intestines. This can cause some major problems when they’re attempting to do their business, but it’s stuck.

Rope expands when wet, so imagine what happens when the rope is eaten. It can also wrap around things and get lodged or cause an obstruction. I’ve seen rope come out in all kinds of crazy ways. My poor dog was constipated for a very long time. I gave her mineral oil as well as hamburger meat and rice to help her along. She ended up pooping out a long piece of rope that was tied up around her feces.

This was years ago, before I knew that rope was dangerous. Well, you can imagine I never gave her rope again after that. Instead, I ended up buying her Kong toys that she could chew on, but never rope after that. Dogs love to eat things. Especially the toys that they destroy. So whatever you buy, make sure if it’s eaten, it’ll come out easily. I’m sorry, it sounds gross, but it’s just the facts of life with a dog.

What other dangers to your pets this Holiday are lurking in those stockings?

Other Toys That Could Be Dangerous.

We’ve covered the raw hides and the rope toys. That’s usually not all that’s included in those stockings though. Oftentimes, the stockings are made for very small dogs. It’s not often that I see stockings that have been made for large dogs. What happens with the ones designed for small dogs, is they have small toys in them.

I mentioned above, that we need to be sure that whatever we give our dogs, we know they’ll come out safely. That means, if they have a very small toy, some will eat the entire thing. The next question we have to ask ourselves – “Will that toy come out safely?”

Yes, yes, gross. But it’s true. Will the toy be able to come out safely when they do their business? If it’s a toy that seems like it might get stuck, then they probably shouldn’t eat it. Now if you have a small dog, then they’re probably not going to eat it. Big dogs though, like Atlas, will eat it. The last thing I want is a visit to the vet during the Holidays. All because of a toy that she ate.

We know all the dangers to your pets this Holiday now.  But what else can we do? How can I gift my dogs something safe?

What Safe Alternatives Are Out There?

Instead of buying the standard stocking from a retailer, make your own. There are loads of fun stockings that we can buy our dogs. Then, instead of the Holiday colored raw hides that are sold in stores, opt for natural chews instead. Buy them toys that you would normally buy for them during the year. Kong toys, Bully sticks, Incredibones, etc.

Each dog is different, and each owner knows what our dogs can handle. Unless you’re a new doggie owner and haven’t figured this out yet. Hopefully, I’m giving you some options then.

There are a lot of toys that companies are making that are actually good for dogs. When it comes to my dog, she loves stuffed animals. Yes, she tears out the cotton, but she spits it out all over the floor. I’m okay with this, because she’s very happy to tear it apart. I simply pick up stuffing on a daily basis. Giving my final condolences to the lost toy.

I also buy rubber chews for her that she can’t eat. Usually Kong. Squeakers are her favorite, so I buy those. Generally speaking, they don’t last long until she kills the squeaker. So many options for the Holidays that aren’t dangerous. It just calls for a little extra shopping. In the end though, your furry pooch will be happy and healthy this Holiday season.

What do you buy for your dogs during the Holiday’s?

2 thoughts on “Dangers To Your Pets This Holiday”