We’re all looking for more natural products for our dogs these days, at least I am. One of the products I’ve been looking into are the best Bully sticks for Atlas.

Here’s the thing with treats and food; if it’s not natural, it doesn’t digest. This goes for humans, and our pets. We’ve all heard of the chemicals that are put in dog food these days.

If you haven’t, I’ve written some articles on it recently. There’s a series about dog food, and there are individual parts for Bully food. Both are good reads if you want to know what’s good for your dog.

Let’s get back to Bully sticks, shall we? 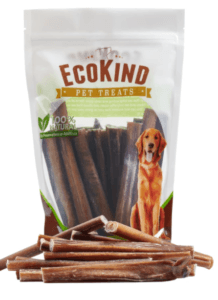 First off, dogs need to chew. It’s vital for their overall well-being.

What’s so special about them?

Should the chew stick be natural?

If it’s not natural, what can happen?

Dogs need to chew because it’s just ingrained in their DNA. It’s on a deep level that they have to chew things. If they don’t have chew toys, well, guess what? It becomes your furniture or your shoes. I don’t know about you, but I’d rather my dog chews on a stick, versus my stuff.

Chewing for dogs naturally calms them. It’s sort of relaxing state for them to just lie somewhere and chew on something. Maybe their jaw aches all the time, so it’s like a baby teething. I’m not a dog, so honestly I’m not sure what goes through their mind. But if you watch a dog while they chew, you can see their eyes have this blissful look to them.

I’ve had dogs chew through drywall. They’ve eaten chunks of carpet. Atlas, she chewed the linoleum in my bathroom and shredded it.

Above, I asked, why Bully sticks? What’s so special about these sticks. First off, they’re larger sticks that your dog can chew on for longer than a couple of gulps. I’m sure you’ve seen those dogs where they get something and you hear a crunch. Next thing you know, you turn to look and it’s gone.

We don’t want that. Personally, it seems like a waste of money to me. I consider those treats, not chew sticks. I want something that will last Atlas at least 20 minutes. Not a crunch minute. Whatever that is.

The best sticks are going to be natural, and I suppose that makes them special in a way.

What makes a chew stick natural versus unnatural. Just like with human food, dog’s food or treats can go through an unnatural process. Meaning, if a manufacturer wants to save money, they’re going to skip some vital steps.

Flour for example. For humans, flour is either bleached, or unbleached. The bleaching process is long, by the way. Companies take flour and they rinse it several times with bleach. It’s rinsed, dried. Rinsed, dried. Basically in the end, people wanted pearly white bleach. I don’t know why this mattered, but it did, and does.

Bleach takes out any nutrients that food had. Period. It went from being a natural product, to an unnatural product. Why do this to dog’s food or treats? It saves companies money, and it looks prettier for people wanting white.

Those pearly white raw hides are SO bad for dog’s. As soon as I found out that these hides didn’t digest, I threw them away.

What does unnatural do?

Unnatural products such as raw hides can’t digest in your dog’s system. They go from enjoying a day of chewing, to all of sudden being sick.

It starts within days. You’ll notice at first, they start to become lethargic. They stop eating and drinking. Next, they’re vomiting and having no bowel movements. You know something’s wrong, so you take them to the vet. That’s when the bad news comes in, your dog is impacted.

This means, those raw hides you were feeding them have caused a block in the lower intestines. Nothing can move past that, and it requires surgery to remove. Surgery costs thousands of dollars. Plus, how painful would that be for your poor dog?

I’ve seen quite a few cases recently of dogs getting impacted with raw hides. It’s more prevalent lately than ever before. The majority of the dogs that get sick, they do from products that have come from overseas. Other countries outside of the USA don’t have the same mandates we do. The FDA and USDA have specific guidelines for foods that are edible. Not only for humans, but pets as well.

In some countries, pet’s aren’t taken care of at all. Abuse and other harmful things aren’t against the law. In fact, I’ve seen some pretty nightmare inducing videos of how animals are treated in some places.

I get why people buy the raw hides for their dogs. The pet stores sell them, and they don’t tell you the consequences. I didn’t know the consequences either. Not until I started doing extensive research on the things I was buying my dog. When I buy Atlas anything, I make sure it’s a natural product.

The Best Bully Sticks are made with 100% digestible beef. They have no additives in them. No chemicals – what more can you ask for?

I also like that the beef that’s used is 100% free-range. Meaning, they’re not cattle that’s placed in cages and force-fed corn and crap. Yes, some cattle food consists of actual crap. Disgusting. These bully sticks though aren’t made with that. So their cows get to roam and eat grass. The way nature intended.

I also like that they include the crude proteins, fats, fiber and moisture. This picture is copied from their site. Handy! 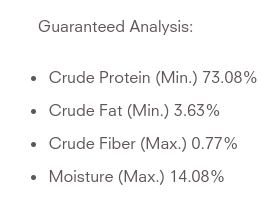 Next time you need some chew sticks for your dog, order these. They’re not overly expensive, and they ship. No having to go to the store with your mask on, or worrying about contracting COVID-19.

Click here to buy the Best Bully Sticks today. Your dog will thank you for it, and your wife will too. They won’t lose any more shoes, and you won’t have to replace the carpet. Or the bathroom floor like I did.