Is the American Bully an American Pit Bull?

AK Hurricane Bullies > History of the Bully Breeds > Is the American Bully an American Pit Bull? 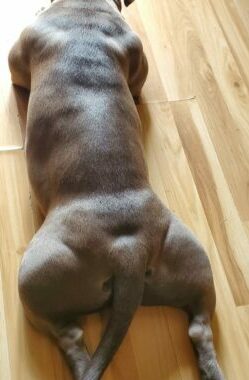 Is the American Bully an American Pit Bull?

Being out with Atlas, my American Bully, in stores always shocks me. When people see her, their reactions tell me they think she’s a Pit Bull. Is the American Bully an American Pit Bull? Why does it shock me when people confuse the two?

Regardless, when I’m out I often get comments like, “What a beautiful Pit!” My reply is simple, “She’s not a Pit, she’s a Bulldog”. Then the weird look comes that tells me they don’t believe me. Then I have to go into the backstory, “Actually, she’s the smallest American Bulldog. The Pocket Bully”

American Bulldogs are often confused at Pit Bulls. Pit Bulls are a part of the American Bully breed. American Bullies have several breeds in them actually. They’re a cross between Pit, Stafford, and many other Bulldogs. 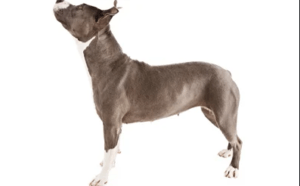 They have very distinct differences when you look at them, though. Their heads are of similar shape and size, but their stature is where they’re different.

Pit Bull Terriers are taller in stature as well as less wide than the standard American Bully. American Bullies are very wide and muscular compared to their cousins the Pit. The Pocket Bullies are also very short legged versus the Pits.

Their heads are just slightly different as well. Pit Bulls often have a more triangular facial structure, whereas the American Bullies have an extremely wide head. 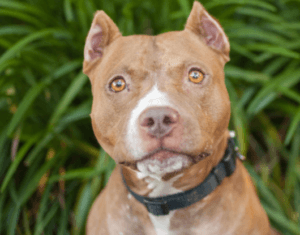 Some American Bullies also have very short muzzles versus the Pits. Atlas does not have the short muzzle, so I see why she can be confused. Her brother has the very short muzzle with wrinkles. His neck is also 3 times as thick as Atlas’. Some of her siblings got the Bulldog look to them versus her. 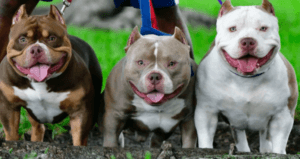 Now, you’ve seen the differences in stature, but what about their demeanor?

The American Bulldog was bred specifically to eradicate the more aggressive nature of the Pit Bull. Now, I will say that I have had Pits before. They are not aggressive unless you raise them to be. However, my female Pits did not always get along with other dogs specifically.

Pits were originally bred to be fighting dogs, especially in the ring. People would often put their Pits against other dogs and the winner would take the money. If your dog lost, it usually meant they were killed by the victor.

Many Pits have been bred to get rid of this behavior, but it can still be ingrained in them from years of fighting. I noticed that my females were usually more aggressive towards other dogs versus the males. This can be their protective nature many female dogs exude.

As for my female American Bully, she is not aggressive towards other dogs at all. I will note that I have been socializing her since bringing into my home. As a young pup, I took her everywhere and introduced her to everyone. I often let people hold her when I took her places.

I also introduced her to a lot of dogs as a puppy and still today. When we’re out and there’s another dog, I let her greet the dog and play for a moment. If the other dog seems remotely aggressive, I keep our distance.

All dogs can show aggression when meeting an aggressive dog.

What Makes Some Dogs Aggressive?

This topic comes up often when people meet my dogs. I’ve raised dogs for a very long time and I’ve become very good at training dogs. I had a friend suggest I come up with a training regime and post it on my website. Because I’ve raised a lot of different breeds of dogs, they all have similar natures in what makes them aggressive.

When a puppy is first out in the world, they get a sense for how you react to people and dogs. If you’re normally a wary person, they too will feel wary. Dogs will mimic behavior they sense in us and others. I have always been a confident person, so my dogs have always been confident as well.

I’ve never had a dog that seemed shy or timid around strangers; dogs and humans alike. Even my small Chihuahua that weighs 2.5 lbs is confident in her abilities. She can meet very large dogs and stand up for herself.

However, I am very observant of other dogs behavior. Humans as well. There have been large dogs that meet my dogs that instantly show aggressive behavior. These are the dogs I keep mine away from.

Is The American Bully Aggressive?

In competitions, the open friendly nature is what is looked for. Timidness, or shyness is also held against them. Some breeders will not allow you to breed with their dogs if the aggressive nature is exhibited. The purpose of the American Bully is to be a loyal companion to the owner and family.

In public while walking her though, she’s fine as long as I give the “It’s okay” command.

While the American Bully is not a Pit Bull, they do share lineage in their history. Many breeders have worked hard to remove the aggressive genes that can stick around with some Pits. I’ve known some American Bully breeders to specifically have to approve the female before they allow their males to breed with them.

Many people don’t understand this application system, but it keeps the breed genuine in nature. Just like with Atlas, I am very picky about the males I’m choosing for her. The last thing I want are puppies that seem more timid, or aggressive in nature.

Atlas is such a unique dog in her loving nature and emotional communication. I would hate for her to breed with a dog that removes these qualities. One thing American Bully owners look for is the loving nature of these dogs. With both humans and dogs alike.

Most Pit Bulls are the same loving dogs, but some can still exhibit the aggressive genes, depending on the owner and raising them. Socializing dogs when they’re young is a huge deterrent in showing signs of aggression. Shyness and timidness can also lead to aggression since when a dog is scared it may lead to a form of aggression.

While the American Bully may share some characteristics with the Pit Bull, they are their own breed. A unique breed of dog that I will continue to want in my life.

6 thoughts on “Is the American Bully an American Pit Bull?”