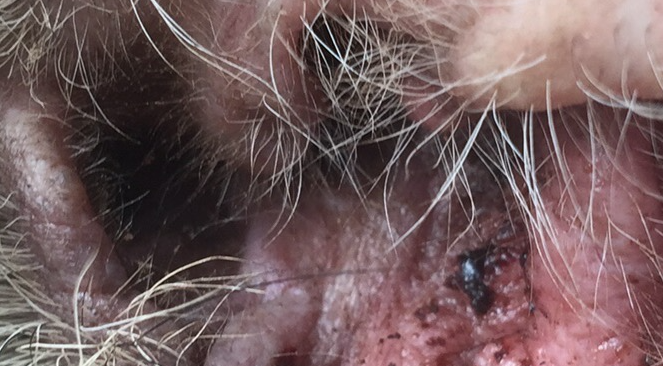 Recently, Atlas had ear mites that we treated at home. It did take quite some time for them to be gone using over the counter medications. I do believe that because the medications we used took so long to kill the mites, she had developed an infection in both ears because of it.  Yeast infections in Bullies ears really only happen when you don’t crop their ears.

Many Bully owners will crop their ears, because naturally, they have floppy ears. Dogs with floppy ears will have the right environment for the yeast to take form and spread.

What is a yeast infection, what are the symptoms, how do you treat it, and will it come back?

What is a Yeast Infection?

Yeast is just bacteria. It’s a type of bacteria that will form if the environment in your Bullies ear is damp or wet for prolonged periods of time. Some dog’s that are prone to getting yeast infections are dog’s that naturally have floppy ears. Spaniels, Hounds, Labs, and yes, my Bully.

We decided not to crop her ears when she was a pup because I wanted to keep her natural. I also felt that it was cruel to cut her ears, so we decided to leave them alone. I love her ears, and I do not regret leaving them floppy. She exhibits all of her emotions through her ears, so I love that I can read her easily. However, having floppy ears does come with its issues, such as her getting mites and then the yeast buildup.

It’s just as it sounds by the name, a yeast infection. Yeast is natural for animals and humans, just like we can get yeast infections. The bacteria loves warm, moist climates and it can develop in this environment. In some cases, it can even smell yeasty, but I never smelled that with Atlas. We did catch it soon, so it was hardly developed, but the vet still needed to treat it.

So what are some signs your dog might have an ear infection?

Signs and Symptoms of a Yeast Infection in your Bullies Ears.

The signs are pretty easy to spot with dog’s. Itching or scratching at their ears often, titling their heads, sometimes even losing their balance can all be signs they have an infection. Some dog’s will develop a yeast-like smell in their ears. I’ve seen some dog’s that have had a yellowish crust that’s formed in their ears as well.

Often, when looking at your dog’s ears, you want to see nice clean skin in the canal. Any sort of crust or odd looking wax could be a potential issue. If your dog seems to be itching their ears often, take a look inside and see what you can find.

Any sort of weird wax buildup should warrant a vet visit. Only with an Otoscope, will your vet be able to determine what might be wrong. There could be several reasons for a yeast infection and it can affect the different parts of their ear.

A dog’s ear is complicated. Sometimes a dog might have an object that’s lodged in their ear and it can cause an infection. In Atlas’ case, it started with ear mites and after treating them, led to the yeast infection. She had this in both ears, so both needed to be treated.

Your vet will inform you of the cause and the treatment needed.

Once your vet has determined the cause of the infection and that it is indeed a yeast infection, they will prescribe the medications needed. The first thing that we were prescribed was an ear rinse. It was called the SkinGuard Cleanse Rinse. I had to fill both her ears with this solution – which she hated – and rub at the base of her ears to help release the wax. She would usually shake her head at this point and then with clean cotton balls, clean thoroughly. In the beginning, it would take about 3 – 4 cotton balls to clean her ears really well, once per day.

After cleaning her ears, then the medication would need to be inserted in her ears. She was prescribed Mometamax medication; that is used to treat yeast infections in dog’s. I was instructed to use these medications once per day for ten days.

Her last day was Sunday, and her ears look nice and clean now. I will say, Atlas hated the cleaning part of her ears, but the drops were fine for her. I didn’t let her shake out the medications, just the solution to get the grime and wax buildup out.

Now that she’s been treated, I do wonder if she’s prone to the infection again.

Will it Come Back?

I’ve been studying and researching on whether dog’s are able to get the yeast infection again once treated. Unfortunately, in everything I’ve seen, yes, dog’s can get it again. I did find some simple ways to prevent a yeast infection however, and one of them was making sure that their ears are dry.

Basically, wet, warm ears are all environments in which yeast thrives. Trying to be sure your dog’s ears are dry will help prevent a return to the vet. It won’t always be the case I’m afraid, as floppy ears can be prone to infections, but taking measures will help.

Yeast infections aren’t the worst thing that can happen to your dog’s ears, but not treating it can lead to serious health concerns. I have seen some extreme cases online during my research. I saw one dog that lost their hearing because of a really bad yeast infection. If not treated, it can turn into a full-blown bacterial infection and this can cause hearing loss for your dog.

I also saw another dog that looked like their ears were completely blocked by all the buildup, and the poor dog was whimpering when anyone went near their ears.

It’s so important to be sure your dog is healthy. This means, paying attention to any sign or symptom that looks like your dog is in discomfort. I knew that something was wrong with Atlas’ ears, so I took her to our vet right away.

Now, she scratches like a normal dog at her ears occasionally, but I can see that inside, they’re clean and pink. No more weird wax buildup, no more discomfort for her. I know she hated the treatment, but it had to be done.

Even today, writing this, I had to grab the solution and medicine because I couldn’t remember the names of them. She picked her head up and eyed them with fear. Sitting up, she stared at them waiting for the cleansing to come. As soon as I put them back in the medicine cabinet, she laid back down and is back to sleeping peacefully.

Regardless of how difficult it was to hold her head, I made sure to clean her ears really well and swap them with cotton.