Broke Up Another Dog Fight. 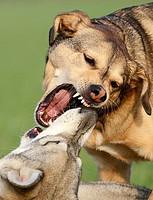 Broke Up Another Dog Fight.

Ah, my dogs. What can I say about these two? Atlas and Muse love to play, but that play can turn too quickly with them. So, today we broke up another dog fight. However, I am here to tell you, it was easy today. So easy in fact, my 14 year old daughter did it without me even knowing.

Two dogs of the same sex, same size, in the same house will often fight for dominance. Dogs that differ in sizes and sex will have a different hierarchy between themselves, so fights are rare. This is why a lot of people will have a male and a female. They rarely get into it. I, on the other hand, have two females. And, while they’ve gotten better, they’re not quite there yet in their training to not fight.

In order to prevent fights, I’ve been working on training them the very basics of obedience. That way, if things escalate, I can recall them to get them back to me. If this doesn’t work, then understanding what to do during the fight is important. And, of course, what to do after.

The Importance of Obedience Training.

Training a dog is so important if you want to be able to have good recall. What do I mean by recall? This means, no matter what the dog is doing, if I state a command like “Heel”, they’ll focus on me versus whatever they’re focused on at the time. Atlas has a good recall so far, but Muse is learning.

Earlier today, I was allowing the dogs to have play time once again, with my close supervision. For the last two weeks, I’ve been putting their muzzles on them during play time so they can’t latch onto each other. This has worked well, but today I didn’t use muzzles. I noticed Atlas was getting a little rough, so when I said, “Heel”, she jumped up on the couch and sat right beside me.

However, when Muse was getting rough, and I said the same thing, nothing. She’s trying, so I’ll give her that, but training takes a lot of time and patience.

Muse not listening to “Heel” isn’t the end all be all. Atlas is more trained than Muse, but I’ve also had her since she was eight weeks old. She’s been listening to me for two years now. Muse? Three months. In the training sessions, which we’ve been diligent about, Muse catches on quickly. But she hasn’t quite gotten the hang of stopping what she’s doing to focus on me yet. Not like Atlas.

She’ll get there, but I have to be more on it with her than Atlas. In our sessions, I always take Muse to train myself. Why? Because I’m here all day with her. It’s important for me to be able to get her to stop what she’s doing to turn her attention back to me. Atlas is easy, so I give her to my husband to train. She listens to everyone in the house, so for her, anyone can be her trainer. Muse on the other hand needs my voice and my consistency during sessions.

Since they got into it again today, I did more of the right things this time, versus the last time they fought.

During play time, I noticed that Muse was getting a little rough. Remember, Atlas was earlier, but she had great recall when I said, “Heel”. When Muse was getting rough, I tried the same, but she wasn’t listening. I think she was upset that Atlas got the upper hand earlier and she wanted to be the big boss this time. The unfortunate part, is I noticed that Muse was getting too rough this time. I stood up to grab her and pull her back to me in the heel position, but it was too late at this point. I simply wasn’t fast enough.

The fight broke out fairly quickly, like they always do. All it takes is a split-second of hesitation, and bam, they’re going at it. This time, my two small dogs were really trying to get involved and probably really hurt, had Muse decided to turn on them. Muse gets into prey drive when she’s fighting, and all bets are off. Atlas is more coherent, so she’s not the one that worries me.

This time, I actually had to grab up the two small dogs first and get them out of the picture. They were really trying to get hurt. Once I got them to safety, I turned around and my 14 year old had both Atlas and Muse by the collars, separated.

When I posted that the two females were originally fighting, I had no idea on how to break them up safely. When dogs are fighting, it’s important to not get your hands between them, because you’ll get hurt. So, I posted a question on FB asking how to break up a dog fight safely when you’re alone.

All kinds of responses came back. Fingers in the butt, wheel barrow their back legs apart, pulling, water, etc. None of this worked the first time, especially when you’re alone. That’s the kicker. I’m alone all day when my daughters are at their bio moms house.

Until I watched an actual dog trainer. Both on YouTube and in real life. Choking them with a collar is the safest and fastest method of breaking up two dogs fighting. You simply grab them by their collar and lift their front legs off the floor.

So, when I turned the corner and Kate had them both by their collars, front legs off the floor, I was amazed! Holy cow, my daughter, who is the smallest in the house, took control and grabbed them up. She didn’t even speak a word, simply walked by me as I’m holding the two small dogs, grabbed them each up and broke it up in seconds. This fight lasted not even 30 seconds.

So, Grab Them Up – She Broke Up Another Dog Fight.

I’m still amazed as I write this about my dogs. I was worried over the small dogs seriously getting hurt, and while I was sliding them across the floor on the opposite side of the room, my 14 year old had already broke up the dog fight. It was safe, she had perfect control of them. Muse didn’t turn on her like she did when my husband did the wheel barrow method.

Many methods that people claim work only get the dogs angry. It’s important to keep calm (which is really hard, I will admit) and separate the dogs that aren’t fighting. Dogs seeing other dogs fighting will often get involved. Like my two small dogs that aren’t very smart. Especially since Harry weighs maybe 5 lbs and Buttons only 3. Because Harry was chewing on Muse, I wanted him out of the way. A big dog can turn quickly on a small dog, and that would be the end of Harry. So, safety was my first priority.

Then, I was turning to grab the big dogs up. But, it was already done.

What to do After The Fight.

Barely any blood this time, only one small nick on Muse’s face. Atlas, not a scratch. As she had them by their collars, and I just turned around (I didn’t leave the room, simply grabbed the two small tards and slid them across the floor) she simply handed me Muse and I put her in her kennel to cool off. Atlas, I told her to go to her place, and she laid on her bed. Done. No injuries, no screaming, no water flown, none of the terrible ideas that came from the posting.

Once separated, let the dogs cool off for just a moment. As soon as they’re calm, you immediately get them back together. I put leashes on them to be sure I had control over both, and let Muse out of the kennel. They started cleaning each other and said their sorry’s. Done. Back to normal. Don’t keep them separate for long, this is very important.

I did some quick “Heel” exercises with them, and they were fine. Now? They’re asleep together.

So, if you have two dogs that fight, the best thing you can do is get a sturdy, buckle clasp collar no thicker than 1.5 inches. Mine are only 1 inch collars. They’re ugly, bright orange, but they work. I bought them at Bass Pro two weeks ago after yet another fight, and they work well. Here they are from Petco and they’re better looking.  Nylon and buckles, no plastic clips that can break. If my 14 year old can do it, anyone can.

So, there you have it. How to break up a dog fight safely, and quickly.