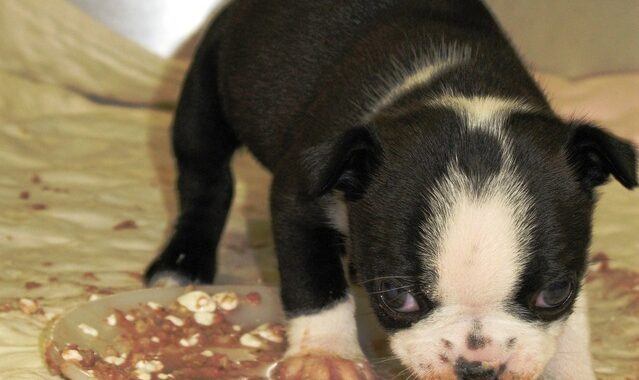 Bully Breed dog food can be difficult to find.   A wholesome food that is not only something your Bully will actually eat, but will be good for them in the long run. I found some articles in a multi-part series on another site.  In diving into the vast majority of dog foods out there, I found that almost all of them have very harmful chemicals.

While I want to ensure my Bully is healthy, I also don’t want to give her processed dog foods that contain junk. I’ve had a lot of people tell me foods that I should give my dogs (I have three), but when I search these foods for recalls, almost all of them have recalls because of harmful chemicals or an imbalance in the food in general.

Many Bully owners believe that their dogs should have only grain-free foods, and almost all articles that I’ve seen published deal strictly with giving their dogs these particular foods. Unfortunately, many of the foods they feed their dogs have made the top list of banned foods according to the FDA. Why?

For humans – do you follow the Atkins diet? 100%? All the time? No? Why should our dogs have this diet then? Many people think that dogs need a diet that is completely different from humans, because, well, they’re dogs. But that’s actually not the case at all.

Most people don’t realize that dogs can get the same diseases and sicknesses that we can. So, knowing that we don’t follow extremely restricted diets 100% of the time, why do we expect our dogs to?

Grain-free foods are foods for animals that have no grains in them. No rice, corn, oats or any other grain, basically. The healthy grain versions of food normally only have brown rice in them which is very healthy for dogs, even Bullies, but they should be in small quantities.  Corn isn’t good for them – they don’t digest it, just like humans FYI.

If we look at where dogs came from, wolves, then you know that the majority of what they ate was meat – yes, even I know this. But, what does a dog do when they have an upset stomach, or they ate something they shouldn’t have? They eat grass.

Many of the dogs ancestors came from places that didn’t have just green lawns that were manicured, or a specially designed type of grass. They ate whatever would help them vomit up the contents in their stomachs. Even though they ate this grass to puke, and the majority of the contents came up, little bits are digested into their system.

So even going back to dog’s ancestors, they ate some sort of grains in order to relieve whatever ailment they had, or ate something they shouldn’t have.

Does this mean that the grass was brown rice? No, of course not. But, this is a very healthy grain, even for us humans. A little about nutrition in general – protein is the component that builds and repairs muscular tissues. Most of you know this. Grains are a sugar based molecule that gives us energy and supports brain function overall. Vegetables have nutrients and vitamins in them that help stabilize the system like immune functions, eyesight, brain function as well and other important benefits.

Dogs internal systems function in a lot of the same ways as ours does. Similar organs, muscular tissue, brains, eyes, etc. While Bullies do need more protein than we do, they still need the other nutritional aspects in their diets.

What My Vet Has Said.

I’m very cautious when it comes to my dogs, especially Atlas. See, I had never had an American Bully Breed before her.   Because she is so near and dear to my heart, I wanted to be sure that she had only the best nutrition.  The best Bully Breed dog food,  the best care, the best of everything in her life.  When I first took her to the vet, the first question out of my vets mouth was, “What food are you feeding her?”   Now, this was a loaded question – let me tell you!   When I asked the breeder, they were very adamant to give her grain-free food. Being the research freak I am, I searched for only the best foods.

What I didn’t know was that Acana was one of the top brands rated by the FDA as causing heart disease in dogs among a list of so many other grain-free foods.

So back to my vet asking me, “What food are you feeding her?” My answer – “Acana grain-free food.”

Whew – the vet immediately pulled a list out that was even laminated! She handed me the list and said, “Get her off that food immediately. Here’s the others that have recently started causing dogs to suddenly die.”

Crap! I looked at the list and recognized all the foods that I saw in blogs everywhere as being good for dogs, especially for the Bully Breeds.

Now, I have a BA in Nutrition Science, so I know what to look for when it comes to food. I studied only food for 5 years! Yes, it took me 5 to complete it – I was working. But, if there’s one thing I learned in all my years of food, is that high protein diets are not good. High fat diets, not good. A diet period – not good. Chemicals, processing, unknown ingredients that you can’t pronounce – none of that is good for the body.

If it’s not a natural source from the planet, our bodies don’t know what to do with this foreign substance and a lot of times, it causes digestive issues that we sometimes can’t come back from. Cancers and ….well….death among other ailments.

So, when I learned that these foods were causing hundreds of death’s worldwide, I immediately took her off that food. Unfortunately, she really liked it, but after researching for over a month on certain dog foods, I now have a saying between the foods when it took Atlas some time to like the good one – it’s the difference between McDonald’s and a salad. If you give your kids the option, they’ll usually choose McD’s. Mine do, unfortunately.

The Only Bully Breed Dog Food I Found in my Search.

Needless to say, it took me hours and hours of research to find the only dog food with no recalls, natural ingredients, limited ingredients and of course, had grains. Let me tell you, look at any dog food out there that’s sold in pet stores and name just 5 that aren’t Grain-Free. That was the hardest part of all – finding one with GRAINS!

Out of the 50 foods I searched, Wellness Core RawRev had 2 recalls – one for too much Thiamine, and one for possible Salmonella contaminants.

Okay – funny story. I was watching a YouTube video of a guy giving his dog raw chicken legs and one of the comments in the video was someone saying, “You’re poisoning your dog with Salmonella. Why would you kill such a cute dog like that?”

Dogs don’t get the symptoms of sickness of salmonella. They can be carriers, but it doesn’t affect them like us.

That’s one major difference in the sicknesses they get compared to humans – we get food poisoning easily because our stomachs have been spoiled over the years and we don’t eat rotted food, or moldy foods like our ancestors sometimes had to. We didn’t exactly have refrigerators back in 1000 BC….. Humans were able to eat certain things long ago too, just not anymore.

But think of the current wolves, Hyenas, all wild dogs in general. They eat raw meat – yes, even birds. Dogs can eat poop and be fine. I thought it was funny that people didn’t know dogs could have raw chicken. Yes – they can. Their system is more equipped to handle those raw foods.

So – dogs need grains. Dogs need protein. They also need healthy vegetables for the vitamins and minerals. There are other food brands out there that are healthy for them, but try to pick one that has the healthy grains. Your dog will be healthy, vital and live a long and full life with you because of a better diet.

What food do you give your Bully Breed?