Is Garlic Good or Bad for Dogs? 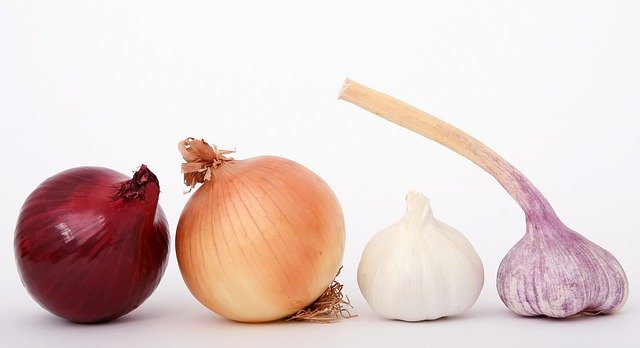 Is Garlic Good or Bad for Dogs?

This question popped into my head last night.  Is garlic good or bad for dogs?   My husband gave our Pocket Bully some stew that I had made for dinner that contained garlic.   Since it contained a lot of beef, we thought, go ahead and give it to the dog, she’ll love it.

What I neglected to realize is that there was some garlic that I had put in this stew.   I knew that I had read in the past that garlic and onions are harmful to dogs.

My heart started racing as I tried to figure out whether she was going to get seriously ill from the 5 small bulbs I had put in there.  I couldn’t recall if I had dished it up for my family, knowing that garlic tends to sink in liquid broths.   So, this led me to do thorough research at 12 am as I considered whether I needed to induce vomiting.

Garlic and Dogs – What Professionals Say.

If you ask your vet about garlic, they’re going to say that it’s harmful for dogs to ingest this and that you should take every precaution to ensure they don’t get a hold of it.

According to the studies I conducted, garlic, along with onions, shallots, leaks and chives, are all part of the Allium group.   Since they contain N-propyl disulfide and thiosulphate, these two compounds can cause serious damage to the red blood cells in dogs.

Reading this last night – I was freaking out! How much garlic is too much now?

How Much Garlic Can Lead to Serious Illness?

This was the major question last night.   I added five small bulbs to my entire pot of stew, what if she ate them all?  In looking at the American Kennel Club’s website, it states that “15 to 30 grams of garlic per kilogram of weight is harmful.”

Atlas weighs 60 lbs, which is about 27 kg so that would mean in order for her health to be at risk, she would’ve had to ingest 400 grams of garlic. That’s about 70 cloves of garlic.

Knowing that the most she ingested were the 5 cloves I put in the soup, she’ll be okay.  At least, according to the calculations found.

Looking into this though, I found some forums where people actually feed their dogs garlic for health reasons. Why?

The Hollistic Approach to Garlic.

Searching on the web, I found a lot of holistic approaches to feeding garlic to dogs.  Some people have been giving their dogs garlic for a decade and stated that their dog is healthy, has a shiny coat, good smelling breath, etc.

Basically what they’ve done, is taken a look at the health benefits of garlic to humans and converted that to their dogs diet.

Many of these dog owners claim they feed their dogs a single, raw clove every day.   Some claim that they only buy fresh, local, organic garlic.   Many claim that you should grow the garlic at home to ensure that it’s natural and healthy.  They especially stay away from the garlic grown overseas.

The only thing that concerns me with this, is that Vets and other professionals claim that small doses of garlic can lead to health problems in dogs over time.   It’s like chocolate, apparently bad for their health.

If this is the case, how can I have seen several pages on Google listing blogs and articles where people deliberately feed their dogs garlic to keep them healthy?  One woman said she’s been giving her dog garlic since he was a year old, every single day and he’s healthy as a horse.

According to several personal blogs, people that prepare their dogs food themselves at home, they add a clove of garlic to their food every day if they weight about 50 lbs.   Under that, I didn’t see much in the lines of recipes or how much garlic they give small dogs.   Most of the blogs/articles I read were for dogs that were larger.

There were quite a few negative comments geared towards people that purposely feed their dogs garlic.  I would imagine because of the number of Vets and other professionals that have claimed that dogs can get seriously ill from consuming garlic.  Other dog owners simply were concerned about their pets overall health.

Some comments were pretty argumentative, claiming that people were purposely killing their dogs over time.  While others argued that they’ve been giving their dogs this same style of homemade food for years.

What are my thoughts after doing research?

One research study that I found was in The Journal of Venomous Animals and Toxins including Tropical Diseases, 2011, Vol 17, Iss 1, Pages 4-11.  It states that based on the research conducted on the Brazilian plants, that because animals have access to these plants that grow readily, animals were in fact getting sick from consuming the above foods mentioned; onions, leeks, shallots and chives.

The Heinz disease as well as Hemolytic Anemia were becoming prevalent in animals in the study, not just dogs, but several species of farm animals.  The results in the paper show that onions were actually more harmful to the animals since they contain more of the Di-propyl-disulphide and Allyl Propylisulfide compounds than garlic.

As far as onions, the research showed that small amounts of garlic can be fine for the animals, but the onions were the primary cause of health issues.

Final Thoughts – Is Garlic Good or Bad for Dogs?

There are quite a few people out there that give their dogs garlic over time.   I still think that because of the compounds in garlic that are beneficial to humans, aren’t beneficial to dogs.

Dogs are similar to humans in that they can get the same diseases and sickness that we get.   However, there are certain foods that we should not give dogs, simply because their digestive system does differ from ours.

As with chocolate, dogs should not consume this.   Onions – based on my research is detrimental to their health.  Some people do give small amounts of garlic to their dogs and it doesn’t seem life threatening.  But, would I give it to my dogs?  No.

Just because we eat certain foods, doesn’t mean our dogs should get everything we eat.

In the future, I will abstain from giving Atlas any foods that contain garlic or onion to be on the safe side.   I’ll continue to make her food at home with brown rice, and seafood.  Meats like salmon, chicken, beef and some vegetables such as carrots and green beans.

I’ll continue to go with the studies that were conducted and play it safe and not give my dogs these foods.

What are your thoughts on this topic?

6 thoughts on “Is Garlic Good or Bad for Dogs?”