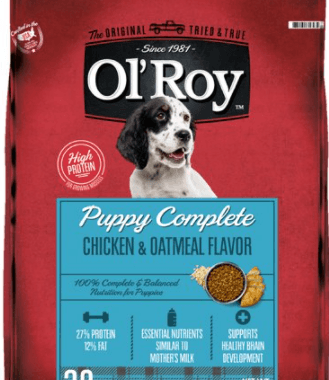 In a long list of dog foods out there, Ol’ Roy Dog Food is among them. A food easily purchased at almost any grocery store, it’s no wonder it sells so well. Many people may not know that Ol’ Roy Dog Food actually is manufactured by WalMart.  This actually doesn’t surprise me in the least.  Many retailers like to have their own name brand items, even dog food.  Helps generate sales and revenue for the company.

The unfortunate part of this, is that they may not care much about the quality of the dog food. In looking into Ol’ Roy, there are some questionable ingredients in the food that I’m weary of.

I pulled the list from Bing. It’s a picture of the ingredients list contained in the Ol’ Roy Dog Food.

Okay, some of these ingredients aren’t bad. But many of them aren’t good either. First off, when it comes to ingredient lists, I have a saying. “If you don’t know what it is, you probably shouldn’t eat it.” This is true even for dog food.

First – Meal Products and What are They?

Let’s dive into the meal products first. Do you know what a meal product is? Let’s start from the beginning then. You have a cow, a chicken or a pig. Several parts of these animals, we consume as humans. Let’s use the chicken first. We eat the meat, gizzards, hearts and feet. I don’t eat the feet personally, but I know many people who do. We know that’s not all that comes from that chicken, right?

Meaning, this “stuff” goes to 1 of 300 plants in the US to be broken down, dried and heated. From there, it’s turned into what’s called a by-product. Now, I get that much of the “stuff” leftover from animals is okay to eat. But, some of it isn’t. For the most part, dog food companies can BUY the quality “stuff” leftover. There’s no way to tell on any given dog food bag the quality of the by-product you’re getting. It’s up to the company to determine the quality.

How do they do that?

The Quality is in the Testing.

In order for any dog food company to determine the quality of the by-product they’re buying, they have to test it. They test for ash levels in the product as well as the calcium levels. Now, if you’re re-reading that, I did say ASH. I mentioned above that they have to heat the by-product up, right?

The level of ash that’s contained in the by-product will tell the company the quality. Too much ash, and the dog can’t digest the by-product. Meaning, you’re getting a dog food that your dog can’t even use for his/her health.

Too much calcium tells the company how much of the good “stuff” is contained in this by-product. Now, I did some extensive poking around about what exactly is in by-product. It’s mainly the bones, the feet, the intestines and all the rest of the organs people don’t eat. That’s fine for my dog, honestly. She can eat kidneys from the chicken, I don’t care. The intestines are also cleaned before they put them in the meal. Usually. Each plant will break the stuff down differently. Some will be sure they measure up to the FDA standards as well as the AAFCO (The Association of American Feed Control Officials) standards.

Any animal meals that go into the dog foods isn’t always bad. Let’s face it, long ago, humans used to eat a lot more of the animal than we do now. Our ancestors didn’t waste anything. So, it makes sense that the food industry has to reuse the “stuff” leftover.

I do want to mention though, that some products that go into meal can be bad. As I said, if the company is less than honest, they really won’t test the levels of ash or calcium. This would mean, that the company is getting a hold of the stuff not safe for consumption.

Meat and Bone Meal, which is just what it sounds like, is the rest of the “stuff” leftover from various animals. Chicken’s are labeled specifically for the leftovers of the birds. However, meat meal is left for the other animals. In some places, meat and bone meal aren’t even used to feed the cattle anymore. Which, in my opinion is great! I mean, we were feeding cattle parts to cattle? Ew. But, some say that the meat and bone meal was the reason cows were coming down with Mad Cow Disease. That’s not good huh?

What about the rest of the ingredients in Ol’ Roy Dog Food? I mentioned a lot about the meat meals. Let’s move on.

The Rest of the Ingredients.

I’m not going to get into everything that’s listed above. Why? Too much for one article I’m afraid. But, I want to get into the very first ingredient mentioned. Before I do, did you know that the list of ingredients is listed by the most of something to the least of something? Meaning, the number 1 ingredient in Ol’ Roy is ground whole grain corn? Dogs do not need that much corn. That’s for sure.

So what is ground whole grain corn and why is that the first thing listed?   Ground whole grain corn is really just, corn.  The entire thing.   And, while whole grain corn contains bran, cereal germ and endosperm, it’s not what our dogs need.   You might be asking, now, “That’s good for my dog then, right?”   Yes and no. Dogs can digest corn, they can digest carbohydrates, actually.  However, dog foods that contain this as their main ingredient are just using fillers for your dog.

Fillers are what make us feel full. Dogs as well. So, instead of using quality meats and vegetables, corn, which is cheap and readily available is used instead. So, you buy a bag of fillers for $30 for the biggest bag possible. Your dog is being fed, sure, but they’re not getting anything really useful.

There are other questionable ingredients as well.

Other Stuff to be Aware of.

This is the important part of this article. The other stuff that you should be aware in Ol’ Roy Dog Food. First and foremost, BHA and BHT. Butylated Hydroxyanisole.  BHA is used as a preservative and has been linked to so many ailments to dogs. Cancers, problems in their digestive system, you name it. This is where I’d like to point out that this is used in cosmetics and pharmaceuticals. It covers the smell of rancid foods as well. Gross.

BHT is Butylated Hydroxytoluene. This is used to prevent food from changing colors, textures and flavors.   Now, lots of studies have been done to see about this causing cancer. The FDA has determined that this is “Generally safe for moderate consumption.” I don’t know about you, but “Generally Safe” doesn’t cut it for me.

Then, you have the food dyes. This is only used to make the food look pretty. Honestly, dog’s don’t care about pretty. So, they mimic the look of vegetables, but we know there’s only corn. Might as well be yellow and brown – the color of the meals used. The dyes though have been linked to cancers. This is why so many people won’t eat foods with these dyes in them. So, instead we’re giving it to our dogs.

Personally, I would skip on buying this brand. I know a lot of people use it, but there’s just nothing good in here for my dogs. Instead, I buy Wellness RawRev with Whole Grains. My dogs love it, they’re healthy and happy, I’m happy.

Choose your dogs food well.  In other words, read the ingredients before you buy it. You like to eat good food, don’t you think your dog does too?