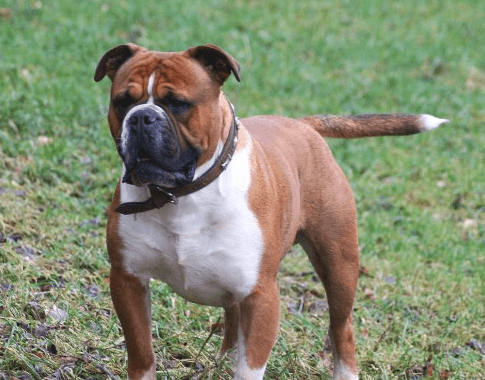 Originally, back in the 1700s, the Bulldog was used for what’s called, Bull Baiting. While this is a sport that’s no longer around, it was very popular in England and other countries centuries ago.

What is Bull Baiting?

What is Bull Baiting?

Bull baiting was a sport that was very popular in England and other counties. Practiced in larger cities, it was popular even in the small towns. To start, the bull was placed, usually, in a hole in the ground. People would attempt to get the bull angry by spraying pepper in the bulls nose.

Once the bull was sufficiently angry and thrashing around, people would sic dogs on the bull. The game was, one dog (usually) at a time would try to get the bulls nose. Only gaining points for successfully sinking their teeth into the nose of course. The head was also allowed during the sport, but the nose was preferred.

Bulldogs were especially good at the sport and often used as the main dogs. Hence the name, “Bulldogs.” An unfortunate sport, often with lots of blood and dogs being injured. The bull would win points by throwing the dogs in the air with their horns.

Thankfully, this sport was outlawed in 1835. However, this put the Bulldogs out of work, and the breed started dwindling down soon after.

Why were Bulldogs the most sought after for this sport?

Bulldogs Were The Favorites.

The Bulldogs were the favored dogs for Bull Baiting simply because of their short stature and athletic nature. Bulldogs also have a very wide mouth, able to clamp onto the bulls head or nose easily. Muscular and agile, they were favored over other breeds.

Other breeds were still used as part of the Bull baiting sports though. Old English Bulldogs, Spanish Bulldogs and Bull Terriers were also used among other breeds.

The leaner breeds with smaller mouths weren’t as successful at the sport as the Bulldogs. This created a demand for Bulldogs simply because of their continued success.

Once banned in 1835, by 1865, much of the Bulldog breed was gone However, conformation shows started popping up and people wanted to bring back the Bulldog. Much of what we see today is the modernized version of the Bulldog with a pug-like look.

Today, the Olde English Bulldogge is a family oriented dog. A lovable demeanor in general, many people seek out this breed. The ABKC frowns on any aggression exhibited both towards people and dogs. They are typically non-aggressive in nature.

Though, the Olde English Bulldogge was one of the breeds that made up the American Bullies. Among several other Bulldog breeds that breeders combined together.

Why do breeders combine breeds together?

I mentioned that the Olde English Bulldogge, among other breeds were combined to create the American Bully. Why do breeders combine several breeds of dogs to create another dog?

Some breeders want to make dogs that look a specific way. They want certain traits from certain breeds. For example, let’s say that I want Atlas to be more wide in the shoulders. I can’t make her wide specifically, but her pups can be. So, in looking for a stud for her, I find a stud that’s wide in the shoulders. I would also look at any pups he created. How are they built? How were his sire and dame (his parents) built?

Some breeders however, will cross with other breeds to make a dog they want specifically. If you wanted a shorter American Bulldog, you could either find a smaller version, like the pocket and mate them together. Or, you breed them with another Bulldog breed that’s very short in stature. Either set of pups will have certain traits that you looked for.

Many people don’t want to cross a pure-breed with another breed though. So, now they simply look for a smaller version of theirs to make the pups smaller today. But essentially, breeders in the past have crossed multiple breeds to make the modern day Bulldogs.

A very loving, family oriented dog, I can see why. Not as wide spread as some of the other breeds, they are very special dogs indeed.

According to the National Bulldogge Association, they exhibit very special qualities. Loyalty, courage, and a very stable temperament. Of course people look to find this lovable breed as family pets!

People would love to see your doggie pictures!

4 thoughts on “The Olde English Bulldogge”