What Causes Mange in Dogs?

What Causes Mange in Dogs?

Atlas was recently diagnosed with mange, but not the bad mange. You might be wondering about that sentence that I just wrote while reading this. “There’s a good and bad type of mange? Isn’t all mange bad?” Sort of. Mange is simply a skin disease that dogs can get, but there are several types that they can get.  What causes mange in dogs?

What are the good VS the bad? Is the good really good and is the bad really that bad?

The Causes of Mange.

I wrote Part 1 of this already last week, you can see it here. I covered just a small portion of what mange is and how dogs get it. But I didn’t cover the different kinds they can get. Let’s cover the basics first; What causes mange in the first place?

Dog’s, like many other animals, get mites on them that live in a coexistence. We have small mites all over our bodies as well, and one of them is called the Demodex Mites.  These tiny mites live on our eyelashes, eyebrows, hair follicles, etc.  These mites live by eating on the dead skin cells that our bodies naturally shed all the time.

These mites don’t harm us, like dogs, unless their numbers grow to exponential proportions, in which they can cause skin irritations.

These same mites live on dogs. Demodex mites are naturally on us as well as animals and we coexist together. However, when these mites get out of control, they can start to irritate your dogs skin.   They can cause redness, and small patches of fur loss in the beginning.   If they continue untreated, your dog will continue to itch uncomfortably, and can start to scratch excessively, causing sores on their bodies that can lead to infection.

Patches of missing fur, or skin irritations, as well as sores is considered mange in animals.

The Good VS The Bad.

I mentioned above that there are three types of mites/mange a dog can get. When some friends found out that Atlas was diagnosed with it, I was asked, “How did she get it? It’s highly contagious and she can only get it from another dog.” Well, yes and no.

The type she has is Demodex Mites. There are two other types that are not good, and are contagious to other animals. One is called Sarcoptic Mange, it’s basically scabies for dogs. The other is called Cheyletiella Mange and is often referred to as Walking Dandruff.

Demodex Mites don’t hurt the dog, they live on their skin. Large numbers can make your dog itchy and once they start to scratch, they get open sores from scratching too hard. They also cause fur loss by their insistent scratching.

The other two types of mange are bad because they’re hard to treat and very contagious to humans and animals alike. 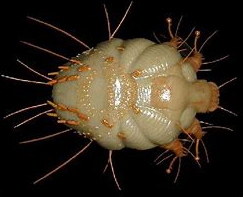 The Sarcoptic Mite is a tick-like mite that burrows into the dogs skin and causes severe irritation and itching. The dog will scratch uncontrollably and this will cause fur loss, sores all over, bleeding and even a crust will form on the skin.

This type of mite can also be transferred to humans if a dog is infected with it, and quarantining the dog is sometimes necessary, especially if there are other animals in the same household.

This type of mite is definitely a bad form of mange and should be treated immediately. The treatment takes on average about 4-6 weeks and can make the dog feel very uncomfortable while being treated. 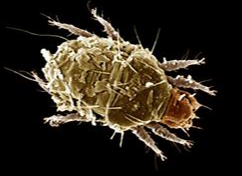 Cheyletiella Mange is referred to as Walking Dandruff because the parasites that cause this type of mange live on the skin. Many dogs show an allergic reaction to these parasites, and flaky skin will start to appear on their backs. According to PetMD, you can physically watch the parasites move while on the dog, which is why it’s called Walking Dandruff.

This parasite is also very contagious to other animals and humans, so while being treated, it’s important to keep the dog quarantined. Similar to the Sarcoptic Mites.

Signs that your dog might have this, as mentioned above, is white flakes along their spine. Some dogs that are more allergic than others will also start to develop scales on their skin.

Treatment is usually the same type of treatment as ticks and fleas and your vet will recommend treatment after a proper diagnosis.

Each Type of Mange Is Different.

As you can tell, there are three types of mange in dogs and only one isn’t contagious, nor is it super bad. While any dog that has been diagnosed should be treated immediately, the type of mange your dog has will determine whether they should be quarantined.

Demodex mites, while they can still cause skin irritation, sores, loss of fur aren’t exactly good, they’re not as bad as the other two forms of mange.

Scabies and Walking Dandruff are scary mites and parasites that, hopefully, Atlas will not ever have to encounter. I’m not happy she got mites in the first place, but if there’s one I’d rather have, it’s the Demodex. A simple one time treatment of Bravecto and she’ll be healed up in just a couple of weeks.

I’ve been keeping an eye on her rash around her eye, and it’s already cleared up in just 5 days.

Ways to Prevent Mange in Dogs.

According to all the articles I’ve read on mange, a healthy diet, a clean home and adequate exercise are all ways that you can help prevent mange. The Demodex is a natural mite that can get out of hand, so you can’t do much to prevent those. As for the other two, ensuring that your dog is well bathed and taken care of, are some ways you can help their immune system fight off these mites.

Kennel’s and boarding are other places they can pick up the dangerous types of mange. Ensuring that the kennel you’re choosing is picky about which dogs they accept, as well as ones that require a clean bill of health will help prevent your dogs from getting sick.

Vet clinics are another place they can pick them up. Make sure that if you see a dog or cat with skin issues, that your dog keeps their distance.

Dog parks and other gathering places are also a threat. If you see any dog that has skin rashes, white flakes, scaly looking skin, etc., keep your dog well away from those other animals.

Being observant and cautious will help keep your dog safe.

8 thoughts on “What Causes Mange in Dogs?”