Dog Is Stung By A Wasp?

AK Hurricane Bullies > Concerns > Dog Is Stung By A Wasp? 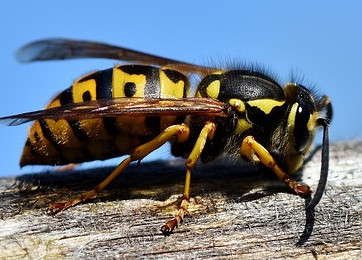 Dog Is Stung By A Wasp?

I was scrolling through the internet, and I came across an interesting article. What do you do if your dog is stung by a wasp? Or a bee for that matter?

This actually happened to Atlas last year. We were over at a person’s house, and I didn’t know there was a wasp nest under the stairs. And what do dogs do when there’s a nest? Why, they stuff their noses in it of course! They’re curious animals, and when they hear buzzing, they want to check it out.

Atlas is no different. She probably heard buzzing around the nest, and decided to check it out. Because it was under the stairs, no one knew about it. I kept wondering why she was so interested in the stairs when she was outside. That is, until she came inside and looked like she had a tennis ball in her mouth.

Wasps – nasty, nasty bugs! So, how do you know you have wasps? What can you do about them to protect your pets or kids? And, if they get stung, what steps should you take?

Now, wasps are nasty little things. It’s not always easy to know that you have nests in your yard. Or, around your house for that matter. Last year, the yellow jackets moved in. Prior to this, we didn’t really experience wasps much in Alaska. Why? It’s cold as heck during the winter. But, we hadn’t had a good snow fall since 2013, so the wasps multiplied.

It ended up to the point where we had three nests on our deck. This seems like a lot, but our deck is massive. Wasps are usually pretty territorial, but for some reason, they moved in next to each other. Not only that, but we also had several bald or white faced hornets as well.

We were sitting on the deck last year with some friends, and my husband was killing a ton of yellow jackets. In fact, after he zapped about twenty, we noticed that there were these huge ones that started coming around. I thought they were the warriors of the wasps and had come to avenge their smaller brothers. They actually tried to Kamikaze us. Instead, these things were twice as large as the yellow jackets. I’m not sure if they were in cahoots with each other, but they were pretty scary looking.

Now that we know the start of my story, how do you know you have a nest?

How do you know there’s Wasp Nests or a Bees Nest?

Wasps are territorial, as I mentioned. When they have a nest around, they like to attack if you get too close to it. I had noticed last year that we kept having yellow jackets come around when I was BBQing. They would actually try to steal chunks of meat off the grill and eat it.

They also get very pesky when they have a nest around your home. You’ll often see them in large numbers, versus just one of two, here and there. Once you start seeing them more and more, you can pretty much decipher a nest is close by. Now, I was under the impression that only one wasp nest will be in a mile-wide area. This is not accurate. In fact, like I mentioned, I had three nests on my deck within a four-foot area.

Once I found out they set up camp in one of my pallets that I had sitting on my deck, it was time to kill them. Well, kill their nests! Now, I’m kind of afraid of wasps, not going to lie. They’re evil little devils and they like to sting. Once you know you have a nest, you do need to get rid of it.

Here’s how. There’s a right way, and the wrong way.  First, my wrong way!  Then, the right way.

Getting Rid of the Nests.

Okay, I’m going to out myself as a sissy in this topic. I’m sorry, I just am. My daughter though, she’s brave and didn’t care about the nests. She said, “What if I put on snow clothes and a helmet? I can kill them then!” I was amazed at her brilliance, and was like, “Yeah!”

So, she dressed up as if it was full-blown winter outside. Thick snow pants, a super puffy jacket, gloves, snow boots, and a snow machine helmet with a hat and face covering. Now, she was hot, but she was fast. She went out there with the water hose, and soaked the nest.

When a wasp nest gets wet, it’s pretty much toast after that. Since it’s made with natural materials, it doesn’t stand up to a water hose well. It will turn into paper mache, and deteriorate fast. So, it fell down, wasps came out swarming, but she soaked them with the hose, too. Next thing you know, a bunch of wasps are slithering around on the deck trying to get air! Take that wasps!

Now, I don’t recommend this method. We’re amateurs, obviously. Like I said, Alaska never really had wasps before this.

The Right Way to get Rid of the Nest.

My husband, thankfully, grew up down south, so he knows how to kill them. He did laugh at our terrible idea once I called him to tell him what we did. He said we’re crazy, and he couldn’t believe our daughter went out to do this, and I couldn’t. I know, I know, shameful.

No, he came home with wasp killer. It shoots like twenty feet in a straight spray, and actually kills these things. Thank goodness! He also said that you go out when it’s cold at night. That’s when they’re in the nest, not out during the day. Oh, okay.

So, he goes out at night, stands right at the nest and sprays. No swarms or crazy wasps coming out to attack. Nope. They were done and he knocks the nest down and sprays it and kicks it over the deck. He looks back at me and says, “See, Babe. Done.” Wow.

What did I learn from this? Don’t do what we did. Follow my husbands plan. Duh.

**Now, I want to make a side note here.  Wasp nests should be taken care of.  They are very territorial, as I have mentioned and they will attack.  Kids, pets, doesn’t matter.  They’re not nice at all. Bees on the other hand do not attack unless threatened.  Bees should be moved and not killed.  We already have a shortage of bees in most parts of the world.  There are people that will move bees nests to help protect them.  So, knowing the difference in huge.  Wasps, though?  Yup, feel free to get rid of them.  They tend to attack bees and harm them, anyways.  We don’t like you wasps!!**

Okay, but what if your dog is stung by a wasp? If you didn’t kill them in time?

What if your Dog is Stung by a Wasp?

As I mentioned, there was a wasp nest under the stairs. Atlas, very interested in the steps at this person’s house, I thought there was a toy under there. Now, I hadn’t walked on the stairs, otherwise, I would have known there was a nest. It wasn’t until after I was stung, that I found out about the nest.

Atlas comes inside the garage where we’re all standing, and she runs to me. I look down at her, and I thought she had a tennis ball in her mouth. “What the heck?” I went to grab the ball from her, but it was her lips! Her whole mouth was swollen as big as a freaking tennis ball!

Now, with bees, once they sting, the stinger will be lodged in their skin. If you have bees, pull the stingers out if you can. Otherwise, it keeps on stinging. Ouch. Wasps however, they don’t lose their stingers, nor do they die after stinging. So, no stingers to find. I was concerned about an allergic reaction, I’m not going to lie. I mean, her poor lips! So swollen!

To help minimize swelling, I did use an ice pack on her lips.  This helped a lot with it.  I do know that you can also make a paste with baking soda and water if you need to, but since the swelling went down quickly, I didn’t do this.

I kept an eye on them over the course of the next hour. If she had started to have breathing problems, lethargy, puking, then a vet visit would have had to happen. Clear indication’s something is wrong.

This is important. If your dog is stung by a wasp, you need to keep an eye on them for the next hour. Any problems that arise, take them to a vet immediately.

In the End, Atlas was Fine.

Her lips finally went down after about an hour, but I watched very closely. I mean, she had never been stung before, so I wasn’t sure what to do. Initially, I thought the wasp nest was under the shed in the back of the yard. Until we all decided to go to the yard after she was better to investigate.

We all trucked out to the yard, and looked around for this nest. We weren’t sure if it was bees, or wasps, so we looked everywhere. When we didn’t find anything, we decided to go back inside. Now, here’s the kicker. We went out the garage door to the yard. However, heading back in, we took the stairs. This is where we found the nest, well, I did anyway. With my leg!

As I’m walking up the stairs, I felt something like a burn, like a cigarette on my leg. I thought, what the heck? I looked down at the back of my leg, and bam! A wasp was stuck on my leg stinging me. You little! I swiped it off with my hand, and then I noticed lots of them! Coming at me! I ran inside so fast and slammed the door shut! Barely making it. I did leave the guys outside though….oops.

They Killed Them! Yay!

Thankfully, there was wasp killer at the house. Of course, my brave hubby goes and grabs it and makes short work of the nest. In just a few minutes, he killed them all. But, now I knew how Atlas got stung. She was shoving her face in between the steps after hearing the buzzing.

Of course, these nasty little aholes didn’t like her face being so close. So, I imagine she was stung by quite a few of them, especially for her lips to swell up like they did. Instead of just one like me, she probably had a dozen. My poor babe. I can’t imagine how she felt being attacked on her face over and over again.

Thankfully, nothing bad had happened and she did run to me after the ordeal. Probably thinking, “Mommy, owie!”

I did inspect her face quite a bit looking to see what had happened before knowing it was wasps. I’ve seen bee stings in the past, so I do know what to do if stung by a bee. Wasps? A little different. Again though, she was fine after an hour or so. Just keep a close eye on them and make sure you know if/when to take them to the vet.

How about you? Has your dog been stung by a wasp? A bee? What did you do? Did they have a reaction? If so, what kind of reaction and how did your vet help?