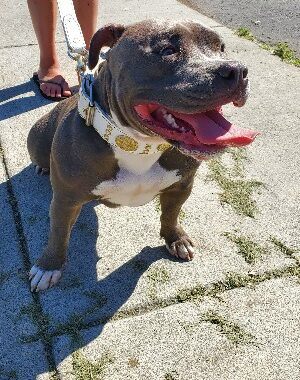 The Pocket Bully. What a rare and exceptional breed of dog. I will admit, I’m new to having a Pocket Bully in my life. However, that doesn’t take away from the awe I feel every day I get to spend with mine. So, what is it about the Pocket Bully that makes them so unique?

For one, they act so human at times. Sure, lots of Bullies do this. But my Pocket Bully, in my eyes, is rare. I’m sure that everyone out there says the same about their dog. I can tell you, I don’t say this about my Chihuahua’s. They’re yappers, they whine, they jump all over me. No, they’re not human by any means.

Sure, they communicate the same as Atlas does. But, they’re still like your average dog. Atlas, she’s not. So what is it about the Pocket Bully that makes them unique?

Where The Pocket Bully Comes From.

Basically, breeders back in the 80’s decided they wanted a more lovable nature APBT. The American Pit Bull Terrier had a history of aggression. I mean, who can blame them? They were used in the brutal sport of dog fighting. Spectators roared and cheered as these dogs tried to take bites out of each other. Not exactly a great sport.

Then, you have the Bulldog itself. Used in the sport back in the 1700’s and the 1800’s of going after Bulls. Taking bites off their nose and other places. So, what happens when you have a dog that’s always fighting? Well, they become aggressive towards animals.

It’s what they were bred and trained to do.

Then, The Bully Was Created.

After people started wanting a more lovable companion, the Bully was created. Bred from all the Bully breeds to become this lovable, family-oriented dog. When aggressive behavior was shown, that dog wasn’t bred. Only the nice ones basically.

Taking the aggression out of this breed was time-consuming and took a lot of effort. Some pretty spectacular dogs came out of it as the result. And, of course, breeders are still always perfecting this breed.

Even to compete in shows, any signs of aggression from this breed are frowned upon. You won’t win any points with the judges that way! No, the opposite is what will get you points. They should be very social dogs, especially around other dogs. Love humans and children and all living beings.

Their demeanor is extraordinary.

Their Specific Demeanor – It’s What Makes Them Special.

What do I mean by demeanor? Well, they should be very social dogs. Not all dogs are social. It’s not always how they’re raised either. Some dogs just naturally don’t like other dogs.

Let’s use my Chihuahua’s as an example here, shall we? My two Chihuahua’s are anything but social. I tried when they were pups, honest. They hate dogs in general. Especially dogs that are larger than them. I get it, it’s like a 15 foot, mean looking dude standing over you. You’re not exactly going to feel at ease.

It’s the same with some dogs. They simply don’t like other dogs. But not the Pocket Bully. They love to play. Meet new dogs, especially at parks. Run around, wagging their tails, romping in the grass.

Atlas has never met a dog she didn’t like. And, vice versa. Dogs seem to love meeting Atlas. They get along right away and want to run off and play. So, we know they’re social by nature. They’re loving and family-oriented.

Now, what did I mean by human traits?

Human traits are hard to explain when it comes to my Pocket Bully. But I’ll try. She watches TV. Yes, that’s right. I’m not talking about just hearing dogs in a movie. I mean, she actually watches TV. Her favorite movie is The Lion King. The new version. If I tune to this movie, she’ll stop whatever she’s doing and just watch it. She even fell asleep at the commercial break last time it was on.

She watched it for about an hour before she fell asleep.

When it comes to talking to them, she pretty much understands whatever I’m saying. Sure, I use keywords so she knows what I’m saying. But let’s say I’m talking about going to get my Mom. I don’t have to use the command word for her to know. As soon as I start mentioning I have to get Grandma to the kids, she jumps off the couch and follows my heels. She stays right there until it’s time to go.

They pick up on what we’re saying, even without words they know.

When she’s feeling lonely, out of the blue, she’ll cuddle right up next to me. She’ll even go so far as to try to grab my arm to wrap it around her.

It’s amazing how they act so human.

What Others Say About Their Pocket Bullies.

Since bringing Atlas into my life, I’ve started being friends with other Bully parents. Many of the Bully parents say their dogs do the same things as Atlas. One gal I know said all her Pocket Bullies watch TV like Atlas does. She said they each have their favorite movies that they all watch when she turns them on.

Others have mentioned that their Bully seems to understand what they say when they talk. Not just, come, sit, stay – no, they actually understand. I’ve seen some pretty amazing APBT’s that do the same. But even my friends with APBT’s claim that Atlas is unique.

They often comment how she doesn’t act like a dog at all. She acts like one of my kids. Even when I say, “Go see sister.” She’ll jump down and go hug one of the girls.

In fact, she was confused last night when I said this. Two of my daughters were here and I said, “Go see sister.” She looked between the two of them and wasn’t sure which one I meant until I pointed.

Final Words on The Pocket Bully.

I know, I can go on and on about how spectacular Atlas is. However, if you’ve been searching for a smart dog, they’re the breed. I mean, there’s a lot of smart dogs out there. Don’t get me wrong. But, they’re low maintenance. No running with them required.

In fact, they’re very lazy. They still need play time, every day. But it’s minimal. I can take Atlas to the park and she’s winded in 5 minutes of chasing a ball. After that, she just sleeps. All day.

They’re small and compact, so they can even get their exercise indoors. As long as you have at least a 10-foot room, throw some toys around. Or a ball. They get winded easily, and they sleep for hours.

Their health is pretty easy to take care of as well. A bath maybe, once every 3 weeks. Good food. Lots of love. That’s all they need in life. Oh, and a warm cuddly bed to sleep in. They do prefer to sleep with their humans, I will say. Atlas did not take to a dog bed, at all. So, if you hate the idea of sleeping with your dog, then you might want a different breed.

After all that, they’re perfect.

What do you love about your Pocket Bully? Share their unique traits for the world to read!