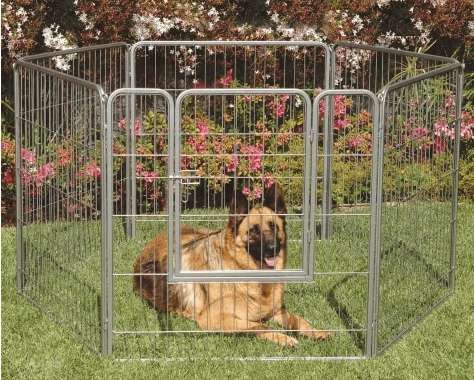 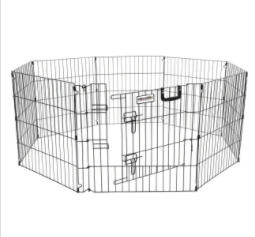 Many of you know, my dog Atlas is a Pocket Bully. I decided to buy her the large dog pen for Bullies back when she was a pup, because she hated the kennel. I’ve always crate trained my dogs, but she is the only dog that would not take to the crate. Normally in the past, it would take an average of 1-2 weeks for my dogs to get accustomed to the crate during training.

Annie, my oldest that recently passed took 2 weeks to crate train, but she was a very stressed and anxious dog.  She needed a cover over her crate to keep her from seeing anything while she was in there.  Otherwise she would shake, whine and start chewing on the bars and plastic.

Atlas unfortunately, never liked the crate.   I tried, honestly, for weeks.  Out of the 12 dogs I’ve crate trained, Atlas is the only one that wouldn’t take to it.   How do I know?   Even after 2 straight weeks, she would continue to thrash around in the kennel.  She screamed this loud shriek, and she would bark non-stop, but it sounded like she was being injured.

I would put her in there and leave for a solid 20-30 minutes and even after listening through the garage door, downstairs, far away, she would still be making these noises.

Now, I understand the necessity for kennel training a dog – here are a few reasons dogs should be crate trained below.

During an emergency rises and you have to board your dog, they put them in kennels while they’re at the boarding house. Vets, pet shops, etc., that provide these services do not leave dogs out to just run around. Generally, they let them out sporadically for exercise (at least they should, always check up on this before choosing any boarding services) but the majority of the time, the dog is in a kennel.

If you’ve never kennel trained a dog, then they will have a very hard time with your dog when you drop them off.  Some even require that the dog be kennel trained before you can use their service.

Dogs that are crate trained actually feel safe in their kennels when they’re anxious, scared or stressed.  My smallest Chihuahua runs to her kennel when she’s feeling stressed and will stay in their until she feels it’s safe again outside.

Dogs should have a safe place to run to when they feel these emotions.   If they’ve never had a kennel they feel safe in, then they can start chewing up the house.  You don’t want that, trust me.

You have a place for them to be while you’re away at work.  Especially if your dog is a chewer and they’ve destroyed your house in the past.  Maybe you have white carpets – eek.

Dogs should always have a safe place for them to be while you’re away for extended periods of time.

What Did I Do For Atlas?

Now that you know I couldn’t get her to take to the kennel, you’re probably wondering what I used instead.  I couldn’t let her run around the house, especially as a puppy. She would pee and poop everywhere. Not something I wanted to clean up after work.

For Atlas, I found the large dog pen. It’s adjustable, it’s large and it’s not fully enclosed. When I put her in this as a puppy, she was fine. I placed her bed in it, some pee pads at first until she was fully potty trained and she wouldn’t make a sound.

How The Large Dog Pen Worked.

The large dog pen for bullies worked within 2 days.   She stopped wanting to pee on the pee pads as soon as it was set up.   I soon found that she was holding her bathroom in too long, and moved the pen to the dog door so she could go in and out during the day.   Since this pen is movable and adjustable, it was perfect.

This was my best option for Atlas during the day when I had to work. Coming home, she wasn’t stressed out and over-anxious – she actually just slept all day.

Since these are metal, they can be used inside and outside.  They’re a perfect solution to keeping your Bully contained if you need to. I purchased the largest one since Atlas will have puppies here soon, and I plan on using this as the puppy play pen. I don’t want puppies running around peeing everywhere.

Get yours today if you need a great dog pen!   There’re different sizes to choose from, so if you have Exotic’s, no need to buy the largest unless you have several that you want to keep together.

Atlas can jump, so even if I wasn’t going to use it for puppies, I would still need the largest walls to keep her from jumping out. My friend down the street has her brother, and she jumped out of his pen with ease while her brother just watched her wondering if he could do the same. It was pretty funny to watch.

What do you use for your dogs at home? Comment below for others to read!