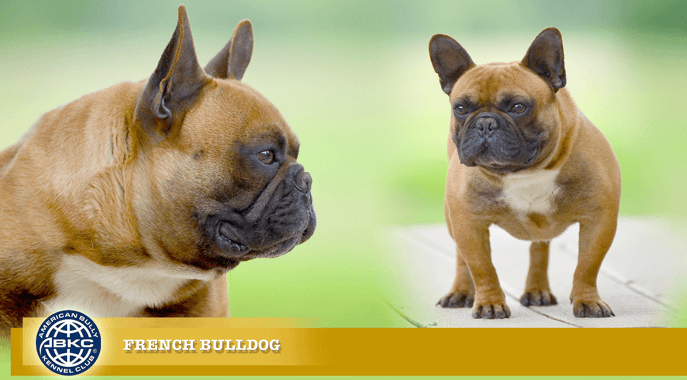 The French Bulldogs have a history similar to the other Bulldogs I’ve written about. They were also one of the breeds that was used in Bull Baiting. You wouldn’t know it today by looking at them, but their history says differently.

How closely does their history resemble their ancestors?

When did they become so small?

What are the common traits looked for in this breed?

Why are they so popular today?

Now, the Bulldogs line has shifted over time. Meaning, some Bulldogs were bred to be larger. Others were bred to be a smaller size. The French Bulldog was one of the breeds that people wanted smaller. The French Bulldog, coming from the Bulldog, was bred with the ratter dogs. Ratter dogs were a small breed of dog that often lived on the streets of England.

The ratter dogs were also a highly energetic breed of dog. Breeding the Bulldog with the Ratter Dog created what’s known as the Toy Bulldog. The Toy Bulldog closely resembles the French Bulldog. However, with the size of this breed, many health problems started to occur and people in England stopped wanting them.

Their Size Was Their Fault.

Breeding the Bulldog with the Ratter dog made for a very small sized dog. As mentioned, the Toy Bulldog was created. However, people soon found in England that these dogs had major health issues. They were often infertile and history states there were other health issues that made them less desirable than the Bulldog.

The Toy Bulldog was usually no more than 12 pounds in weight. However, because people were trying to make this breed smaller and smaller, the UKC refused to recognize the Toy Bulldog breed. They stated that the breed was a mixed breed and refused to give them a name to recognize.

However, in France, the “French Bulldog” was very popular. Showing up in paintings in the 1800’s and referred to as Bouledogue Francais. So, while in England, people didn’t want these tiny dogs, in France, it was the opposite. Highly sought after for their size, they were often featured in paintings by Toulouse-Lautrec.

Being popular in France, there were common traits often looked for in this breed.

Common Characteristics of the French Bulldog.

Even though we know England didn’t fare well with the Frenchie, in France, they were very popular. Their small size, large ears that stood up, was what drew people to them. Even though the UKC didn’t want to recognize the breed, that didn’t stop the French from pursuing them.

They became highly fashionable dogs, portrayed in the paintings of ladies of class. Not only did high class ladies want them, but so did others. Artists sought them for their paintings, and writers liked to write about them. Fun loving, adorable little Bulldogs with big ears resembling a bat. It’s no wonder the French looked for them for their companions.

Now, the breed is highly recognized all over the world. Short in stature, no more than 30 pounds in order to be recognized. They also are referred to as a flat faced breed. Their ears are one of the most prominent features on them, resembling bat ears. Short, silky fur and large eyes that are almost black in color.

So, what makes them so popular now?

Becoming One of the Most Popular Breeds Today.

The French Bulldog has a history to them, just like the other Bulldog breeds. From Bull Baiting, to being small cuddly Teddy Bears. They have certainly grown in popularity over the years. Frenchies are very easy to have as house pets. They require little exercise, and it’s actually advised to not exercise them in extreme heat. Their flat noses makes it hard for them to breath in hot weather.

They are prone to obesity, so it is advised to keep them from a fatty diet. However, not having to run them daily makes for a great house dog. Especially for people that don’t get out much, like in Alaska. The French Bulldog is also very, very lovable. They love the cuddle time with their parents, so that makes them sought after as well for families.

Very easy to groom, a simple brushing is all it really takes. All these reasons is what makes people love them so much! They are very affectionate, and very responsive to outbursts of anger. Often, when they do something bad, a simple scolding is all that’s required of them. They are very sensitive to discipline and only want to please their owners.

Final Words on the French Bulldog.

As you can see, they are some of the best dogs out there. In Alaska, we have a very large population of French Bulldogs everywhere. Especially nice for smaller homes, they are just so easy to take care of. Even in the frigid winters of Alaska, they don’t need a lot of exercise. Some say a small daily walk is all that’s needed to keep their weight at healthy levels.

I have a few friends that have French Bulldogs, and they often just run around the house for exercise. So, even on days like today where it’s only 1 degree F, they’re perfect dogs for the winter.

Now, it is advised to keep them away from water. In Alaska, we have a lot of lakes and streams. Unfortunately, the French Bulldog doesn’t swim so well because of their larger front ends. So, a life vest is highly advisable if you take them on the water with you.

The French Bulldog is such a great, family pet. I can see why so many people seek these dogs out. Do you have a Frenchie? What do you just love about them more than anything else? Share your special moments for the world to read!

**Cover picture courtesy of the ABKC.org.  Click here to read more about this breed from their site.